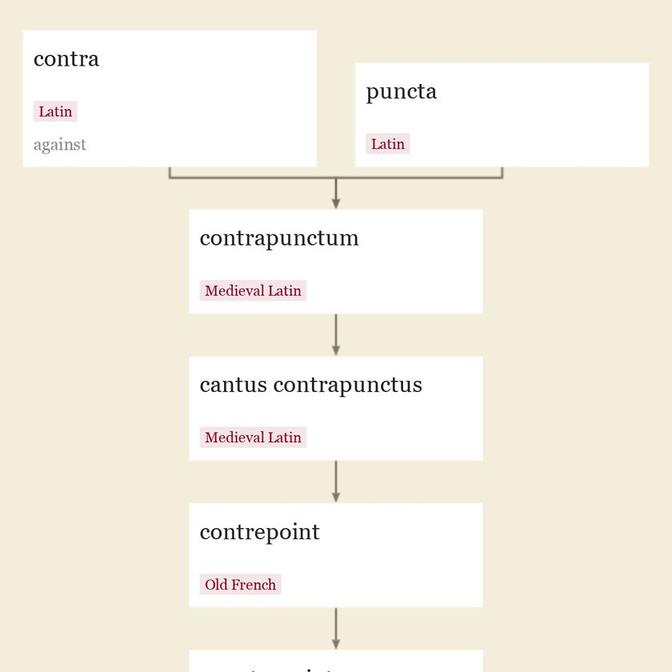 mid-15c., "art of singing an accompaniment to plain song," from Old French contrepoint, from Medieval Latin cantus contrapunctus, from contrapunctum, from Latin contra "against" (see contra (prep., adv.)) + puncta (see point (n.)). It is a reference to the indication of musical notes by "pricking" with a pointed pen over or under the original melody on a manuscript. Meaning "one or more melodies added, according to fixed rules, to a given melody or theme" is from 1520s.

Related entries & more
Advertisement
tune (n.)
early 14c., "a musical sound," unexplained variant of tone (n.). From late 14c. as "a well-rounded succession of musical notes, an air, melody." Meaning "state of being in proper pitch" is from mid-15c.
Related entries & more
treble (n.)
"highest part in music, soprano," mid-14c., from Anglo-French treble, Old French treble "a third part," noun use of adjective (see treble (adj.)). In early contrapuntal music, the chief melody was in the tenor, and the treble was the "third" part above it (after the alto).
Related entries & more
raga (n.)

Related entries & more
intonation (n.)
1610s, "opening phrase of a melody," from French intonation (14c.), from Medieval Latin intonationem (nominative intonatio), noun of state from past participle stem of intonare (see intone). From 1788 as "action of intoning." Meaning "modulation of the voice in speaking, utterance of tones" is from 1791.
Related entries & more
Advertisement
dulcimer (n.)

In classical mythology, sacred to Apollo and to Venus. The singing of swans before death was alluded to by Chaucer (late 14c.), but swan-song (1831) is a translation of German Schwanengesang. The ancient Indo-European mythical swan-maiden so called by mythographers from 1829. Swan dive is recorded from 1898.

1670s, "a song," especially one slow and monotonous, from chant (v.), or else from French chant (12c.), from Latin cantus "song, a singing; bird-song," from past participle stem of canere. Meaning "a Gregorian melody," usually of medieval origin, is from 1789. Meaning "monotonous recitation of words" is from 1815.

Related entries & more
harmonize (v.)
late 15c., "play or sing in harmony," from French harmoniser (15c.), from Old French harmonie (see harmony). Meaning "be in harmony (with), go well together" is from 1620s. Transitive sense "bring into harmony" is from 1700; figurative sense "bring into agreement" is from 1767. Meaning "add harmony to (a melody)" is from 1790. Related: Harmonized; harmonizing.
Related entries & more
lay (n.1)
"short song," mid-13c., from Old French lai "song, lyric," of unknown origin. Perhaps from Celtic (compare Irish laid "song, poem," Gaelic laoidh "poem, verse, play") because the earliest verses so called were Arthurian ballads, but OED finds this "out of the question" and prefers a theory which traces it to a Germanic source, such as Old High German leich "play, melody, song."
Related entries & more