early 15c., "slanting, sloping, sideways; crooked, not straight or direct," originally of muscles or eyes, from Old French oblique (14c.) and directly from Latin obliquus "slanting, sidelong, indirect," which is perhaps from ob "against" (see ob-) + root of licinus "bent upward," from a PIE root meaning"to bend, be movable," the source of see limb (n.1). But De Vaan writes, "The etymology is unknown. Closest in form and meaning are līmus 'transverse' and sublīmis 'transverse from below upward', and the latter would be morphologically similar to oblīquus. Yet a root *lī- with different suffixes *-mo- and *-kwo- does not immediately make sense, and has no clear connections outside Italic."

In some of the IE languages there is a single word for "thumb," which is called the "big finger," like NE big toe. Many of the single words are of similar semantic origin, based on the notion of "stout, thick." [Buck]

Compare Greek megas daktylos "thumb," but Greek also had antikheir, literally "what is opposite the fingers." Italian pollice, French pouce are from Latin pollex, perhaps formed (on analogy of index) from pollere "to be strong."

Phrase rule of thumb attested by 1680s (the thumb as a rough measure of an inch is attested from c. 1500). To be under (someone's) thumb "be totally controlled by that person" is recorded from 1580s.

Thumbs up (1887) and thumbs down (1906) were said to be from expressions of approval or the opposite in ancient amphitheaters, especially gladiator shows, where the gesture decided whether a defeated combatant was spared or slain. But the Roman gesture was merely one of hiding the thumb in the hand or extending it. Perhaps the modern gesture is from the usual coachmen's way of greeting while the hands are occupied with the reins. 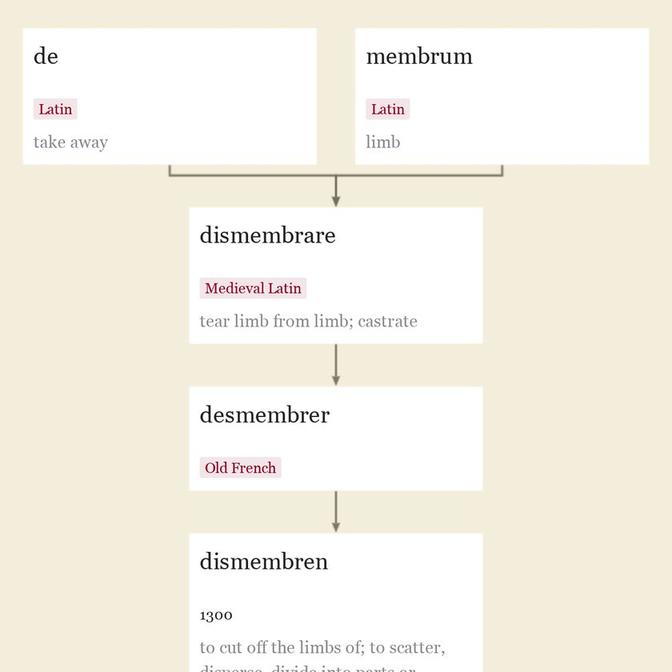 "punctuation mark consisting of two dots, one above the other, used to mark grammatical discontinuity less than that indicated by a period," 1540s, from Latin colon "part of a verse or poem," from Greek kōlon "part of a verse," literally "limb, member" (especially the leg, but also of a tree limb), also, figuratively, "a clause of a sentence," a word of uncertain etymology.

The meaning evolved in modern languages from "independent clause" to the punctuation mark that sets it off. In ancient grammar a colon was one of the larger divisions of a sentence.

mid-13c., "to move slowly, be crippled," from cripple (n.). Transitive meaning "make a cripple of, lame, partially disable by injury to a limb or limbs" is from early 14c. (implied in crippled). Related: Crippling.