1820, "member of the progressive and reformist political party of Great Britain, an anti-Whig," from liberal (adj.). General meaning "person of liberal political principles or tendencies" (without reference to party) is by 1832; in reference to persons of a political ideology not conservative or fascist but short of socialism, from c. 1920. Also used from early 20c. of ministers from less-dogmatic Christian churches.

Conservative, n. A statesman who is enamored of existing evils, as distinguished from the Liberal, who wishes to replace them with others. [Ambrose Bierce, "Devil's Dictionary," 1911] 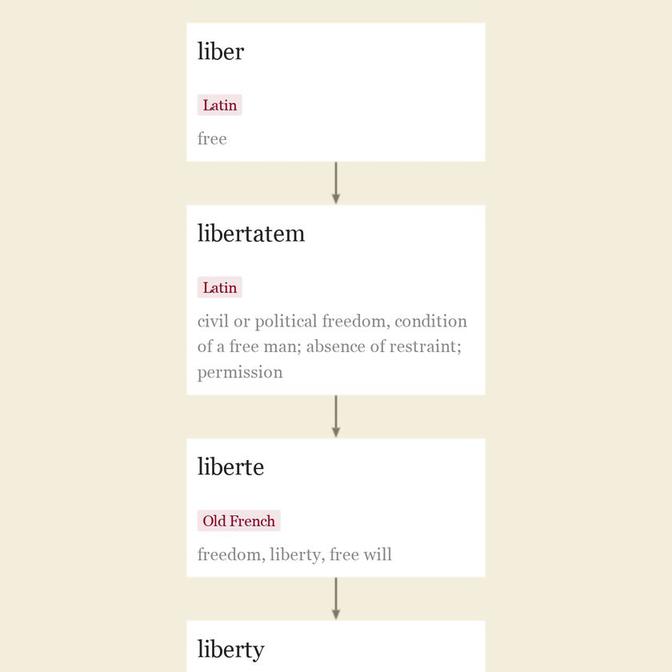 late 14c., "free choice, freedom to do as one chooses," also "freedom from the bondage of sin," from Old French liberte "freedom, liberty, free will" (14c., Modern French liberté), from Latin libertatem (nominative libertas) "civil or political freedom, condition of a free man; absence of restraint; permission," from liber "free" (see liberal (adj.)). At first of persons; of communities, "state of being free from arbitrary, despotic, or autocratic rule or control" is by late 15c.

Nautical sense of "leave of absence" is from 1758. The meaning "unrestrained action, conduct, or expression" (1550s) led to take liberties "go beyond the bounds of propriety" (1620s). The sense of "privileges by grant" (14c.) led to the sense of "a person's private land" (mid-15c.), within which certain special privileges may be exercised, which yielded in 18c. in both England and America a sense of "a district within a county but having its own justice of the peace," and also "a district adjacent to a city and in some degree under its municipal jurisdiction" (as in Northern Liberties of Philadelphia). Also compare Old French libertés "local rights, laws, taxes."

late 14c., "pouring out of wine in honor of a god," from Latin libationem (nominative libatio) "a drink-offering," noun of action from past-participle stem of libare "pour out (an offering)," perhaps from PIE *lehi- "to pour out, drip" (source of Greek leibein "to pour, make a libation").

Sense of "freethinker" is first recorded 1560s, from French libertin (1540s) originally the name given to certain pantheistic Protestant sects in France and the Low Countries. This sense partakes more of liberty and liberal than of the classical meaning (in Old French, libertin meant "Saracen slave converted to Christianity"). Meaning "dissolute or licentious person, man given to indulgence of lust" is first recorded 1590s; the darkening of meaning being perhaps due to misunderstanding of Latin libertinus in Acts vi:9. For "condition of being a libertine" 17c English tried libertinage; libertinism (from French libertinisme).
Related entries & more
libretto (n.)
plural libretti, "book containing the words of an extended musical composition," also the words themselves, 1742, from Italian libretto, diminutive of libro "book," from Latin liber (genitive libri) "book" (see library). Related: Librettist (1849).
Related entries & more
liberation (n.)

Liberation theology (1969) translates Spanish teologia de la liberación, coined 1968 by Peruvian priest Gustavo Gutiérrez (b. 1928). In late 19c. British history, liberationism, liberationist are in reference to the movement to disestablish the Church, from the Liberation Society, devoted to the freeing of religion from state patronage and control.