Advertisement
all
word
name
phrase
suffix
prefix
word root
27 entries found.
Einstein (n.)
as a type-name for a person of genius, 1920, in reference to German-born theoretical physicist Albert Einstein (1879-1955), who was world-famous from 1919 through media accounts of his work in theoretical physics. According to "German-American Names" (George F. Jones, 3rd ed., 2006) it means literally "place encompassed by a stone wall."
Related entries & more
Advertisement
battalion (n.)

1580s, from French bataillon (16c.), from Italian battaglione "battle squadron," from diminutive of Vulgar Latin *battalia "battle," from Latin bauttere "to beat" (see batter (v.)). Specific sense of "part of a regiment" is from 1708. The oft-repeated quote "God is on the side of the largest battalions" (with many variants) usually is attributed to 17c. French military genius and marshal Turenne:

Some cold Saturnian, when the lifted tube

And thanks the friendly pow'r that fix'd him there.

Related entries & more
-i-
a "connective" element in many words formed with Latin or Greek suffixes, now often felt as part of them (as in -iac, -iacal, -ial, -ian, -ify, -ity, etc.). Properly it forms no proper part of the suffix but is often the stem-vowel of the initial word in the Latin compounds (genial from genius), or a modified form of it. As such forms were very common, -i- was used merely connectively or euphonically in some Latin compounds (uniformis) and in later words made from Latin components in English or French (centennial, editorial).

The Greek equivalent is -o-, which also became an active connective in English, but they now are used indifferently with elements from either language.
Related entries & more
couturier (n.)

"male dressmaker or fashion designer," 1885, originally as a French word in English, from French couturier, from couture "sewing, dressmaking" (see couture). Couturière "female dressmaker" is attested in English from 1818.

THE couturier—the bearded dressmaker, the masculine artist in silk and satin—is an essentially modern and Parisian phenomenon. It is true the elegant and capricious Madame de Pompadour owed most of her toilets and elegant accoutrements to the genius of Supplis, the famous tailleur pour dames, or ladies' tailor, of the epoch. But Supplis was an exception and he never assumed the name of couturier, the masculine form of couturière, "dress-maker." That appellation was reserved for the great artists of the Second Empire, Worth, Aurelly, Pingat, and their rivals, who utterly revolutionized feminine costume and endeavored to direct it in the paths of art, good taste, and comfort. ["The Parisian Couturier," Lippincott's Magazine, October 1885]

"In early Greek mythology, the spirit of revenge, that prompts the members of a family to commit fresh crimes to obtain satisfaction" [Encyclopaedia Britannica, 1941]. The name also was used of the evil genius which drives a man to sin and of a man so driven. A Greek word of uncertain origin. The traditional guess is that it is literally "the unforgetting," from a- "not" (see a- (3)) + root of lathein "to forget," aorist of lanthanein "to lie hidden, escape notice," from PIE root *ladh- "to be hidden" (see latent). Or else it might be connected with alaomai "to wander, roam," figuratively "to be distraught." As a proper name, in Greek tradition a son of Neleus and Chloris; brother of Nestor, he was slain by Herakles. 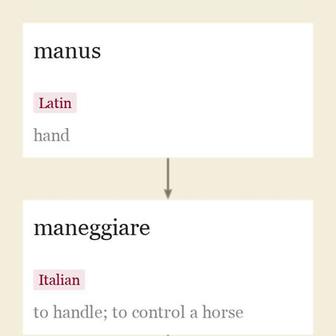 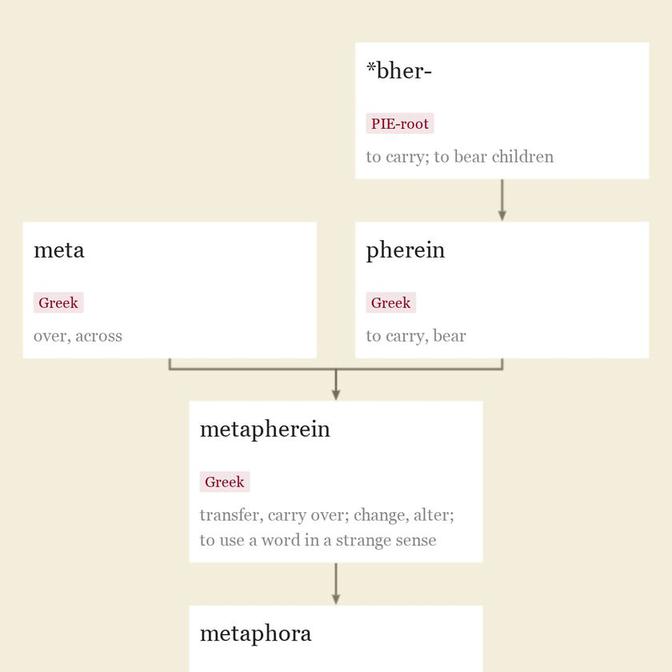 "figure of speech by which a characteristic of one object is assigned to another, different but resembling  it or analogous to it; comparison by transference of a descriptive word or phrase," late 15c., methaphoris (plural), from French metaphore (Old French metafore, 13c.) and directly from Latin metaphora, from Greek metaphora "a transfer," especially of the sense of one word to a different word, literally "a carrying over," from metapherein "to transfer, carry over; change, alter; to use a word in a strange sense," from meta "over, across" (see meta-) + pherein "to carry, bear" (from PIE root *bher- (1) "to carry," also "to bear children").

But a metaphor is no argument, though it be sometimes the gunpowder to drive one home and imbed it in the memory. [James Russell Lowell, "Democracy," 1884]

It is a great thing, indeed, to make a proper use of the poetical forms, as also of compounds and strange words. But the greatest thing by far is to be a master of metaphor. It is the one thing that cannot be learnt from others; and it is also a sign of genius, since a good metaphor implies an intuitive perception of the similarity in dissimilars. [Aristotle, "Poetics," 1459a 3-8]

"fanatical enthusiasm for a cause or person, blindly shared by the masses;" 1845, a German word in a specialized philosophical sense taken whole into English (in the Edinburgh Review, which adds "a word untranslatable, because the thing itself is un-English"), from German Schwärmerei "noisy, dissolute pleasures; religious fanaticism," from schwärmen "to swarm," figuratively "to be enthusiastic" (related to the noun Schwarm; see swarm (n.)).

The second element might be the German equivalent of -ery, but the sense is not clear. Perhaps the meaning in -rei is essentially diminutive and also denotes ridiculousness or contemptibility [a suggestion from D. Boileau, "Nature and Genius of the German Language," 1843, who cites among other examples Liebelei, "vulgar, insipid sweethearting," Ausländerei "too-frequent use of foreign words"].

But we are in hard times, now, for all men's wits; for men who know the truth are like to go mad from isolation; and the fools are all going mad in "Schwärmerei,"—only that is much the pleasanter way. [Ruskin, "Fors Clavigera"]