late 14c., "open disregard or disobedience" (of authority, the law, etc.); general sense of "act of despising, scorn for what is mean, vile, or worthless" is from c. 1400; from Old French contempt, contemps, and directly Latin contemptus "scorn," from past participle of contemnere "to scorn, despise," from assimilated form of com-, here perhaps an intensive prefix (see com-), + *temnere "to slight, scorn, despise," which is of uncertain origin.

De Vaan has it from PIE *tmn(e)- "to cut," with cognates in Middle Irish tamnaid "cuts," Greek tamno (Attic temno) "to cut;" Lithuanian tinti "to whet," colloquially to beat;" archaic Russian tjat' "to beat." He adds, "The compound contemnere is the older verb, from which temnere has been backformed more recently. The etymology is disputed: the meaning 'scorn' has probably developed from a more concrete meaning ...."

Latin also had contemptrix "she who despises." Phrase contempt of court "open disregard or disrespect for the rules, orders, or process of judicial authority" is attested by 1719, but the idea is in the earliest uses of contempt. 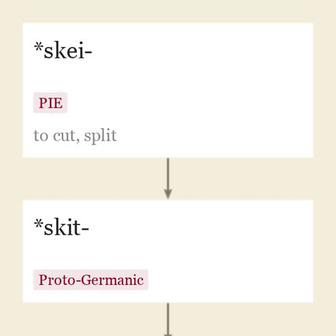 "Shit" is not an acronym. The notion that it is a recent word might be partly because it was taboo from c. 1600 and rarely appeared in print (neither Shakespeare nor the KJV has it), and even in "vulgar" publications of the late 18c. it is disguised by dashes. It drew the wrath of censors as late as 1922 ("Ulysses" and "The Enormous Room"), scandalized magazine subscribers in 1957 (a Hemingway story in Atlantic Monthly) and was omitted from some dictionaries as recently as 1970 ("Webster's New World").

Extensive slang usage; meaning "to lie, to tease" is from 1934; that of "to disrespect" is from 1903. Shite, now a jocular or slightly euphemistic and chiefly British variant of the noun, formerly a dialectal variant, reflects the vowel in the Old English verb (compare German scheissen); the modern verb has been influenced by the noun. Shat is a humorous past tense form, not etymological, first recorded 18c. To shit bricks "be very frightened" attested by 1961. The connection between fear and involuntary defecation has generated expressions in English since 14c. (the image also is in Latin), and probably also is behind scared shitless (1936).