c. 1600, "talkative, nimble in talk;" 1670s, "displaying unbecoming levity," apparently an extended form of flip (v.). The ending is perhaps modeled on other adjectives in -ant or a relic of the Middle English present participle ending -inde. Shortened form flip is attested from 1847. Related: Flippantly. 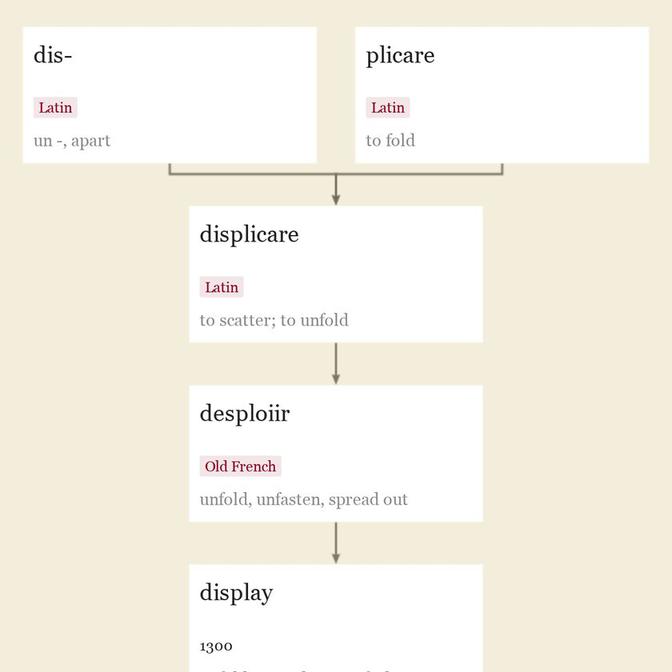 Properly of sails or flags (and unconnected to play); meaning "reveal, exhibit, expose to view" is late 14c.; sense of "reveal unintentionally, allow to be seen" is from c. 1600. Related: Displayed; displaying.

early 14c., "action of displaying," from Old French exhibicion, exibicion "show, exhibition, display," from Late Latin exhibitionem (nominative exhibitio), noun of action from past-participle stem of Latin exhibere "to show, display, present," literally "hold out, hold forth," from ex "out" (see ex-) + habere "to hold" (from PIE root *ghabh- "to give or receive"). Also from early 15c. as "sustenance, food, source of support." Meaning "that which is exhibited" is from 1786.

1540s, "having or displaying the qualities of a hero," shortened from heroical (early 15c., also heroycus) "noble, magnanimous," from Latin heroicus "of a hero, heroic, mythical," from Greek hērōikos "of or for a hero, pertaining to heroes," from hērōs (see hero (n.1)). In some modern uses, "having recourse to extreme measures." The Heroic Age, semi-mythical prehistoric period in Greece, ended with the return of the armies from the fall of Troy. Related: Heroically. Heroic verse (1610s), decasyllabic iambic, is from Italian.

1857, "mathematical condition of being at right angles, state or fact of being normal in geometry," from normal + -cy. The word has been associated since 1920 with U.S. president Warren G. Harding (who campaigned that year under the slogan "Return to Normalcy," meaning pre-World War I conditions). Previously normalcy was used mostly in the mathematical sense and the word preferred by purists for "a normal situation" is normality. Harding's use of it was derided during his administration as an example of his much-belittled incompetence with the language (Democratic politician William G. McAdoo Jr. called Harding’s speeches "an army of pompous phrases moving across the landscape in search of an idea").

America’s present need is not heroics, but healing; not nostrums, but normalcy; not revolution, but restoration; not agitation, but adjustment; not surgery, but serenity; not the dramatic, but the dispassionate; not experiment, but equipoise; not submergence in internationality, but sustainment in triumphant nationality. [Harding, "Readjustment" speech, May 24, 1920]

Not in Watkins or de Vaan, but Buck (with Tucker) describes it as "one who adorns his wares to give them an appearance of greater value" and writes it is probably a loan-word based on Greek manganon "means of charming or bewitching."

Used in combinations in English at least since 12c. (fishmonger, cheesemonger, etc.); since 16c. chiefly with overtones of petty and disreputable (for example ballad-monger "inferior poet," 1590s; scandal-monger).

It is a curious instance of the degradation through which words go, that what was in the Saxon period the designation for the most elevated description of merchant, mangere, is now only a term for small dealers, and principally in petty wares, monger. [Thomas Wright, "Anglo-Saxon and Old English Vocabularies," 1884]

late 15c., "formal document authenticated by an affixed seal" (a sense now obsolete), from Old French placquard "official document with a large, flat seal" (14c.), also "plate of armor;" ultimately from Middle Dutch, either from Middle Dutch plackaerd or via the French verb plaquier "to lay on, cover up, plaster over," from Middle Dutch placken "to patch (a garment), to plaster," related to Middle High German placke "patch, stain," German Placken "spot, patch."

The meaning "written or printed paper displaying some proclamation or announcement, intended to be posted in a public place to attract attention" is attested in English by 1550s; this sense is in French from 15c. As a verb, "to put placards upon," by 1813.