1650s, "general science or theory of the material universe as an ordered whole," from Modern Latin cosmologia, from Greek kosmos (see cosmos) + -logia "discourse" (see -logy). By 1753 as "the branch of metaphysics which discusses the ultimate philosophical problems relating to the existence of the universe." Related: Cosmologist.

They cannot scare me with their empty spaces

Between stars—on stars where no human race is.

I have it in me so much nearer home

To scare myself with my own desert places.

mid-15c., mondeine, "of this world, worldly, terrestrial," from Old French mondain "of this world, worldly, earthly, secular;" also "pure, clean; noble, generous" (12c.) and directly from Late Latin mundanus "belonging to the world" (as distinct from the Church), in classical Latin "a citizen of the world, cosmopolite," from mundus "universe, world," which is identical to mundus  "clean, elegant," but the exact connection is uncertain and the etymology is unknown.

Latin mundus "world" was used as a translation of Greek kosmos (see cosmos) in its Pythagorean sense of "the physical universe" (the original sense of the Greek word was "orderly arrangement"). Like kosmos (and perhaps by influence of it), Latin mundus also was used of a woman's "ornaments, dress," which also could entangle the adjective mundus "clean, elegant."

The English word's extended sense of "dull, uninteresting" is attested by 1850. Related: Mundanely. The mundane era was the chronology that began with the supposed epoch of the Creation (famously reckoned as 4004 B.C.E.). 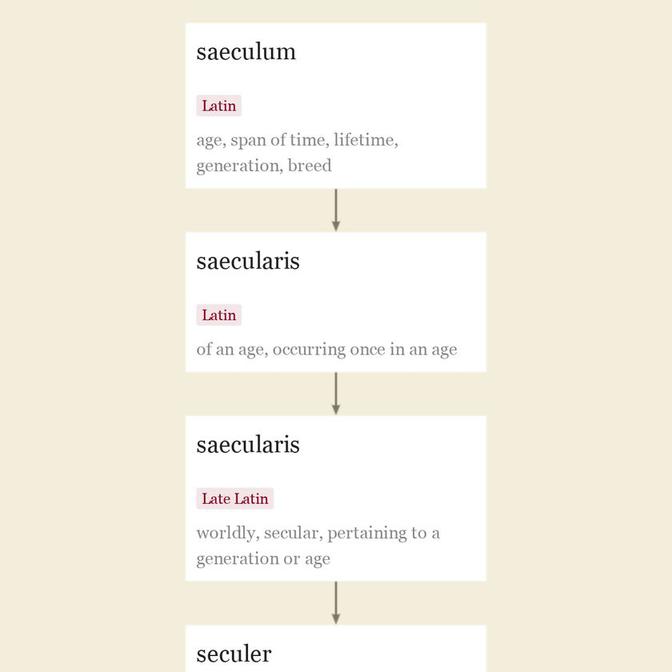 This is from Proto-Italic *sai-tlo-, which, according to Watkins, is PIE instrumental element *-tlo- + *sai- "to bind, tie" (see sinew), extended metaphorically to successive human generations as links in the chain of life. De Vaan lists as a cognate Welsh hoedl "lifespan, age." An older theory connected it to words for "seed," from PIE root *se- "to sow" (see sow (v.), and compare Gothic mana-seþs "mankind, world," literally "seed of men").

Used in ecclesiastical writing like Greek aiōn "of this world" (see cosmos). It is source of French siècle. Ancient Roman ludi saeculares was a three-day, day-and-night celebration coming once in an "age" (120 years). In English, in reference to humanism and the exclusion of belief in God from matters of ethics and morality, from 1850s.

From late 14c. in reference to any of the supposed concentric, transparent, hollow, crystalline globes of the cosmos believed to revolve around the earth and contain the planets and the fixed stars; the supposed harmonious sound they made rubbing against one another was the music of the spheres (late 14c.). Also from late 14c. as "a globe; object of spherical form, a ball," and the geometric sense "solid figure with all points equidistant from the center." Meaning "range of something, place or scene of activity" is first recorded c. 1600 (as in sphere of influence, 1885, originally in reference to Anglo-German colonial rivalry in Africa).
Related entries & more
universe (n.) 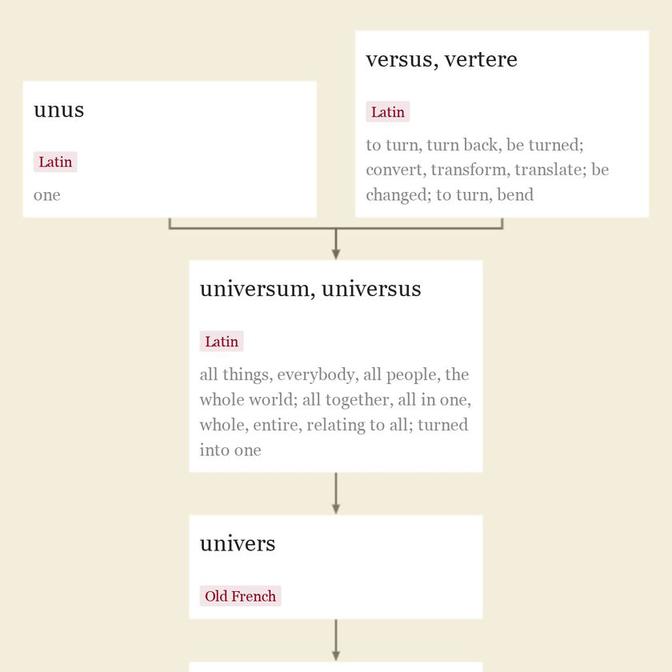 1580s, "the whole world, cosmos, the totality of existing things," from Old French univers (12c.), from Latin universum "all things, everybody, all people, the whole world," noun use of neuter of adjective universus "all together, all in one, whole, entire, relating to all," literally "turned into one," from unus "one" (from PIE root *oi-no- "one, unique") + versus, past participle of vertere "to turn, turn back, be turned; convert, transform, translate; be changed" (from PIE root *wer- (2) "to turn, bend").
Related entries & more
Advertisement
level (v.)

A word here as to the misconception labored under by our English neighbor; he evidently does not understand the American manner of doing things. We never level down in this country; we are always at work on the up grade. "Level up! Level up!" is the motto of the American people. [James E. Garretson, "Professional Education," in "The Dental Cosmos," Philadelphia, 1865]

Modern use is mostly from computer gaming (2001). To level off "cease rising or falling" is from 1920, originally in aviation. Related: Leveled; leveling.