"to bring to a nonplus, to perplex, puzzle, confound," 1590s, from the noun nonplus "state in which one is unable to proceed or decide" (1580s), usually in a phrase such as at or to a nonplus, properly "state where 'nothing more' can be done or said," from Latin non plus "no more, no further" (see plus). Related: Nonplussed.

1590s, pusle "bewilder, confound, perplex with difficult problems or questions," possibly frequentative of pose (v.) in obsolete sense of "perplex" (compare nuzzle from nose). To puzzle (something) out "resolve or discover by long cogitation or careful investigation" is by 1781. Related: Puzzled; puzzling.

early 15c., "to furnish with a floor," from floor (n.). Sense of "puzzle, confound" is from 1830, a figurative use, from earlier sense of "knock down to the floor" (1640s). Colloquial floor it "press down hard on the accelerator pedal of a motor vehicle" is by 1986 (compare earlier step on it in the same sense). In mid-19c. English university slang, it meant "do thoroughly and successfully" (1852). Related: Floored; flooring.

"to cheat, trick, swindle," 1703, originally a slang or cant word, of unknown origin. Perhaps Scottish from bombaze, bumbaze "confound, perplex," or related to bombast, or related to French embabouiner "to make a fool (literally 'baboon') of." Wedgwood suggests Italian bambolo, bamboccio, bambocciolo "a young babe," extended by metonymy to mean "an old dotard or babish gull." Related: Bamboozled; bamboozler; bamboozling. As a noun from 1703.

Related entries & more
Advertisement
boggle (v.)
1590s, "to start with fright (as a startled horse does), shy, take alarm," from Middle English bugge "specter" (among other things, supposed to scare horses at night); see bug (n.); also compare bogey (n.1), boggart. The meaning " hesitate, stop as if afraid to proceed in fear of unforeseen difficulties" is from 1630s; that of "confound, cause to hesitate" is from 1640s. As a noun from 1650s. Related: Boggled; boggling; boggler (from c. 1600 as "one who hesitates").
Related entries & more
maze (n.)

Meaning "labyrinth, baffling network of paths or passages" is recorded from late 14c. (on the notion of something intended to confuse or mislead"). Also as a verb in Middle English, "to stupefy, daze" (early 14c.).

All hands were called to "come up and see it rain," and kept on deck hour after hour in a drenching rain, standing round the deck so far apart as to prevent our talking with one another, with our tarpaulins and oil-cloth jackets on, picking old rope to pieces or laying up gaskets and robands. This was often done, too, when we were lying in port with two anchors down, and no necessity for more than one man on deck as a look-out. This is what is called "hazing" a crew, and "working their old iron up." [Richard H. Dana, "Two Years before the Mast," 1840] 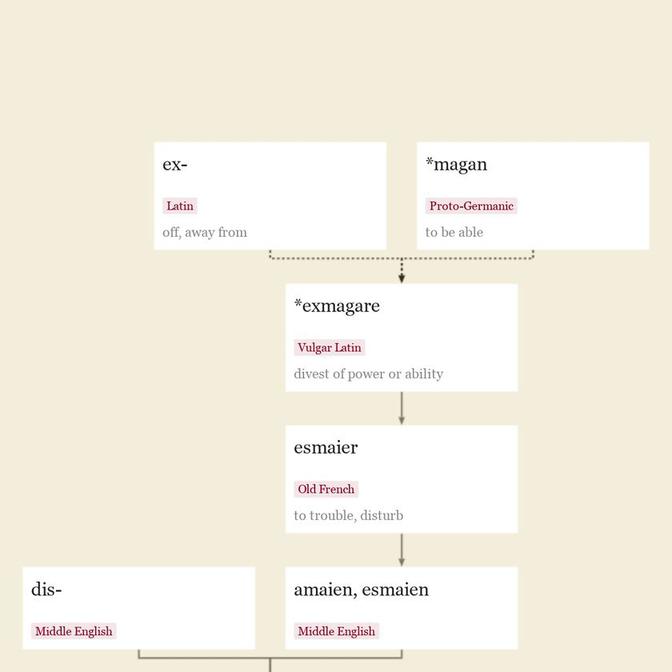 c. 1300, dismaien, "become or be alarmed, upset, or frightened; to confound, break down the courage of by danger or difficulty or fear of calamity, fill with despairing apprehension;" perhaps formed in Anglo-French or Middle English from dis-, here probably intensive (see dis-), + amaien, esmaien, from Old French esmaier "to trouble, disturb."

This is from Vulgar Latin *exmagare "divest of power or ability" (source of Italian smagare "to weaken, dismay, discourage"), from ex- (see ex-) + Proto-Germanic *magan "to be able" (source also of Old High German magen "to be powerful or able"), from PIE root *magh- "to be able, have power."

There also was an Old French *desmaier (attested only in past participle dismaye), from de-, intensive prefix, + Old French esmaier, which also might be the source of the Middle English word. Spanish desmayer "to be dispirited" is a loan word from Old French. Related: Dismayed; dismaying.