The word was rare after 17c., but it was revived mid-19c. (sometimes in French form culte) with reference to ancient or primitive systems of religious belief and worship, especially the rites and ceremonies employed in such worship. Extended meaning "devoted attention to a particular person or thing" is from 1829.

Cult. An organized group of people, religious or not, with whom you disagree. [Hugh Rawson, "Wicked Words," 1993]

Cult is a term which, as we value exactness, we can ill do without, seeing how completely religion has lost its original signification. Fitzedward Hall, "Modern English," 1873]

"a distilled spirit blended with certain essential oils so as to give off a fragrant scent," by 1844, short for Cologne water (1814), loan-translation of French eau de Cologne (which also was used in English), literally "water from Cologne," from the city in Germany (German Köln, from Latin Colonia Agrippina) where it was made, first by Italian chemist Johann Maria Farina, who had settled there in 1709.

"Now, a worked Lyon handkerchief, moistened, not with cologne, but with rose-water. Eau de cologne is vulgar, it's the odor of every shopboy; and now you are ready, and I leave you." ["Charles Sealsfield" (Karl Anton Postl), "Rambleton," 1844]

The city seems to have been known in English generally by its French name in 18c. The city was founded 38 B.C.E. as Oppidum Ubiorum, renamed and made a colony in 50 C.E. at the request of emperor Claudius's wife Agrippina the Younger, who was born there. By 450 C.E. the name had been shortened to Colonia (see colony).

1813, "of or pertaining to the raising of plants or animals," from Latin cultura "tillage, a cultivating, agriculture," figuratively "care, culture, an honoring," from past participle stem of colere "to tend, guard; to till, cultivate" (see colony). With -al (1). Figurative senses of "relating to civilizations," also "the cultivation of the mind," are attested by 1875; hence, "relating to the culture of a particular place at a particular time" (by 1909).

Cultural anthropology is attested by 1910, and cultural has been a fertile starter-word among anthropologists and sociologists, for example cultural diffusion, in use by 1912; cultural diversity, by 1935; cultural imperialism, by 1937; cultural pluralism, by 1932; cultural relativism, by 1948. China's Cultural Revolution (1966) began in 1965; the name is a shortened translation of Chinese Wuchan Jieji Wenhua Da Geming "Proletarian Cultural Great Revolution." 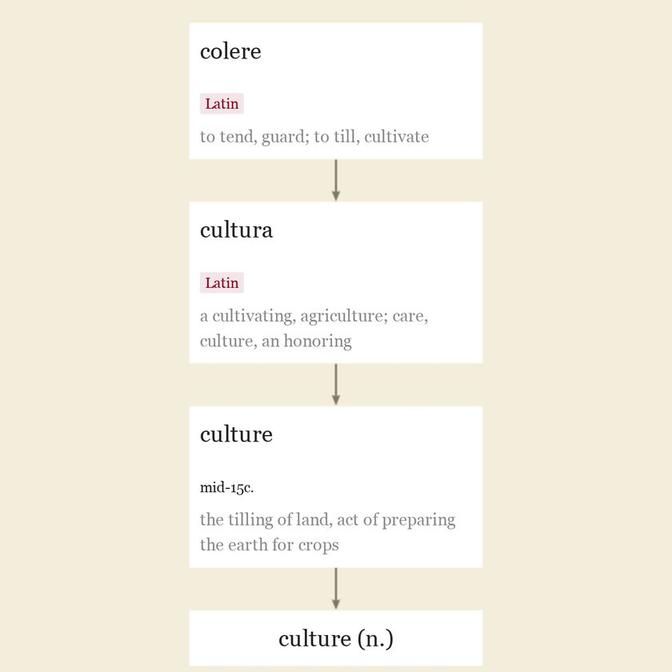 country in southwest Africa, a former Portuguese colony, from N'gola, title of the native ruler there when the Portuguese made contact. Related: Angolan.

secret society devoted to ending British rule in Kenya colony, by 1950, probably from the Kikuyu language of Kenya, but the exact meaning is disputed.