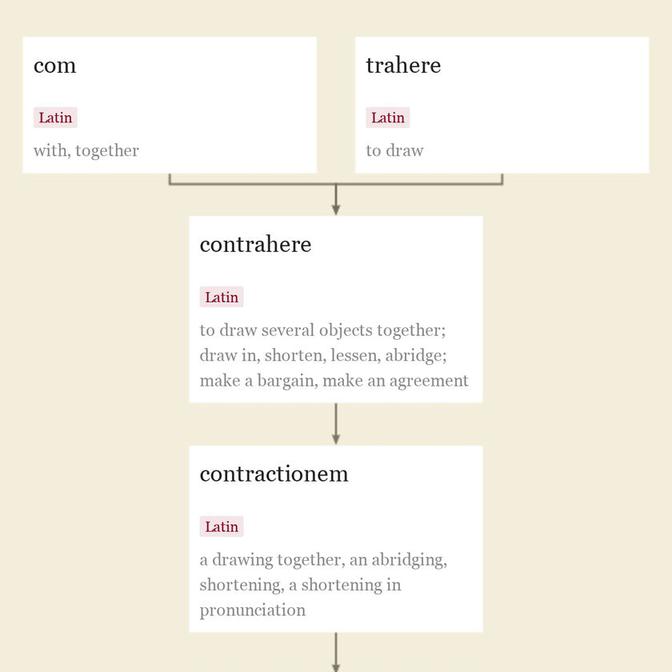 early 15c., contraccioun, "action of making a contract" (especially of marriage), a sense now obsolete; also "action of reducing, abridging, or shortening," from Old French contraction (13c.) or directly from Latin contractionem (nominative contractio) "a drawing together, an abridging, shortening, a shortening in pronunciation," noun of action from past-participle stem of contrahere "to draw several objects together; draw in, shorten, lessen, abridge," metaphorically "make a bargain, make an agreement," from assimilated form of com "with, together" (see con-) + trahere "to draw" (see tract (n.1)). Related: Contractional.

Meaning "action of becoming shorter or smaller through the drawing together of the parts" is from 1580s. Meaning "action of acquiring (a disease) is from 1680s. Grammatical sense of "a shortening of a word or syllable in pronunciation or writing" is from 1706; meaning "a contracted word or words" is from 1755. Contractions of the uterus in labor of childbirth attested from 1962.

"characteristic of city life, pertaining to cities or towns," 1610s (but rare before 1830s), from Latin urbanus "of or pertaining to a city or city life; in Rome," also "in city fashion, polished, refined, cultivated, courteous," but also sometimes "witty, facetious, bold, impudent;" as a noun, "city dweller," from urbs (genitive urbis) "city, walled town," a word of unknown origin.

The word gradually emerged in this sense as urbane became restricted to manners and styles of expression. In late 20c. American English gradually acquiring a suggestion of "African-American." Urban renewal, euphemistic for "slum clearance," is attested from 1955, American English. Urban sprawl recorded by 1958. Urban legend attested by 1980.

late 14c., practisen, "to follow or employ" a course of action; c. 1400, "to do, put into action or practice;" from Old French pratiser, practiser "to practice," alteration of practiquer, from Medieval Latin practicare "to do, perform, practice," from Late Latin practicus "practical," from Greek praktikos "practical" (see practical).

From early 15c. as "to carry on a profession," especially medicine; also "to do or perform repeatedly or habitually with the object of acquiring skill, to learn by repeated performance;" from mid-15c. as "to perform, work at, exercise." Intransitive sense of "perform certain acts repeatedly, train one's self" is by 1590s. Sense of "to cause to practice, teach by exercise, train, drill" is from 1590s. Related: Practiced; practicing.

"utterance, recitation, action of the verb 'say,' " c. 1300, verbal noun from say (v.); meaning "something that has been said" (usually by someone thought important) is from c. 1300; sense of "a proverbial expression, an adage" is attested from mid-15c.

Phrase it goes without saying is attested from 1862 in a French context, used in English and American newspapers from c. 1868 and much complained of at first as without obvious sense.

Ça va sans dire, a familiar French locution, whose English equivalent might be "that is a matter of course," or "that may be taken for granted." But recently it has become the tendency to translate it literally, "that goes without saying," and these words, though originally uncouth and almost unmeaning to the unpractised ear, are gradually acquiring the exact meaning of the French. [Walsh, 1892]

From early 14c. as "endeavor, effort, exertion; instigation, contrivance;" late 14c. as "act of acquiring, procurement." The meaning "that which is bought" is from 1580s. The sense of "hold or position for advantageously applying power, firm hold by which power may be exerted" (1711) is extended from the nautical verb meaning "to haul or draw (especially by mechanical power)," often used in reference to hauling up anchors, attested from 1560s. Wif of purchase (early 14c.) was a term for "concubine."