c. 1400, robous, "waste, broken, or worn-out material," especially "rubble from the demolition of a building, etc.," from Anglo-French rubouses (late 14c.), a word of unknown origin. There are said to be no apparent cognates in Old French; OED says "app. related in some way to rubble."

The spelling with -ish is from late 15c. As "any useless or worthless stuff" by c. 1600. The verb sense of "disparage, criticize harshly" is attested by 1953 in Australian and New Zealand slang. Related: Rubbished; rubbishing.

The modern meaning "a strain of invective, a bitter and violent criticism" by 1804, apparently from French.

Meaning "enclosed child's bed with barred sides" is 1640s; probably from frequent use in reference to the manger where infant Jesus was laid. Thieves' slang for "house, public house, shop" dates to at least 1812, but late 20c. slang use for "dwelling house" probably is independent. The Old High German version of the word passed to French and became creche. 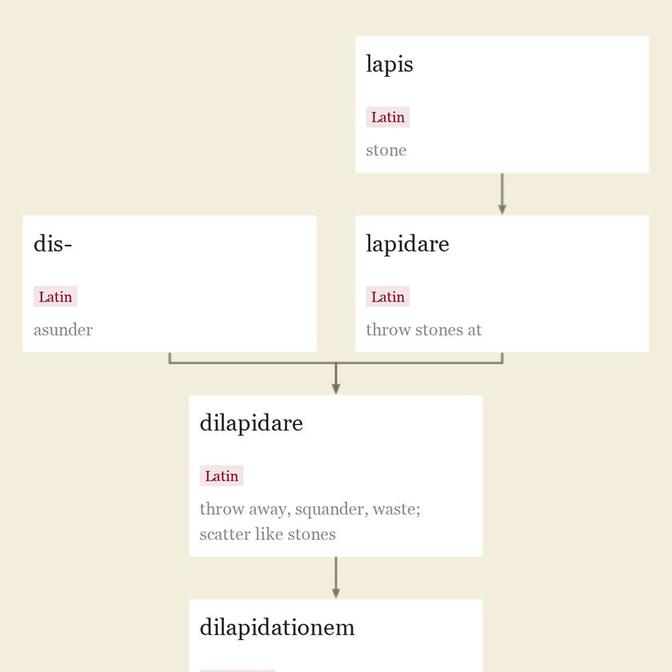 late 14c., "thing of little use or value, waste, refuse, dross," perhaps from a Scandinavian source (compare Old Norse tros "rubbish, fallen leaves and twigs," Norwegian dialectal trask "lumber, trash, baggage," Swedish trasa "rags, tatters"), of unknown origin. Applied to ill-bred persons or groups from 1604 ("Othello"), and especially of poor whites in the U.S. South by 1831. Applied to domestic refuse or garbage from 1906 (American English). Trash-can is attested from 1914. To trash-talk someone or something is by 1989.

late 14c., "wasting of the body by disease; wasting disease, progressive emaciation" (replacing Old English yfeladl "the evil disease"), from Old French consumpcion, from Latin consumptionem (nominative consumptio) "a using up, wasting," noun of state from past-participle stem of consumere "to use up, eat, waste," from assimilated form of com-, here perhaps an intensive prefix (see com-), + sumere "to take," from sub- "under" (see sub-) + emere "to buy, take" (from PIE root *em- "to take, distribute"). Meaning "act of consuming, the using up of material, destruction by use" is 1530s.

early 15c., "cesspool, pit for reception of wastewater or sewage," from sink (v.). The meaning "drain for carrying water to a sink" is from late 15c., and the sense of "shallow basin (especially in a kitchen) with a drainpipe for carrying off dirty water" is by 1560s.

The figurative sense of "place where corruption and vice abound, abode or resort of depraved or debauched persons" is from 1520s.  In science and technical use, "place where heat or other energy is removed from a system" (opposite of source), from 1855, from the notion of sink as "receptacle of waste matter."

Meaning "condition of being ruined or wasted, destruction" is from early 15c. Sense of "a desolated place, a devastated or lifeless region" is from 1610s.