common name of the Dianthus Caryophyllus or "pink," a herbaceous perennial flowering plant; 1530s, a word of uncertain origin. The early forms are confused; perhaps (on evidence of spellings) it is a corruption of coronation, from the flower's being used in chaplets or from the toothed crown-like look of the petals.

Or it might be called for its pinkness and derive from French carnation "person's color or complexion" (15c.), which probably is from Italian dialectal carnagione "flesh color," from Late Latin carnationem (nominative carnatio) "fleshiness," from Latin caro "flesh" (originally "a piece of flesh," from PIE root *sker- (1) "to cut"). OED points out that not all the flowers are this color.

This French carnation had been borrowed separately into English as "color of human flesh" (1530s) and as an adjective meaning "flesh-colored" (1560s; the earliest use of the word in English was to mean "the incarnation of Christ," mid-14c.). It also was a term in painting for "representation of the flesh, nude or undraped parts of a figure" (1704).

The flowering plant is  native to southern Europe but was widely cultivated from ancient times for its fragrance and beauty, and was abundant in Normandy.

1630s, "action of bringing to a center, act of collecting or combining into or about a central point," noun of action from concentrate (v.). Meaning "a mass so collected" is from 1670s; that of "voluntary continuous focusing of mental activity" is from 1825, in phrenology.

Concentration camp is from 1901, originally "compound for noncombatants in a war zone," a controversial idea in the second Boer War (1899-1902). The term emerged with a bad odor.

The concentration camp has now definitely taken its place side by side with the Black Hole of Calcutta as one of those names of horror at which humanity will never cease to shudder. [The Review of Reviews, London, March 1902]

"anything that guides or directs in an intricate case," 1590s, a special use of a revised spelling of clew "a ball of thread or yarn" (q.v.). The word, which is native Germanic, in Middle English was clewe, also cleue; some words borrowed from Old French in -ue, -eu also were spelled -ew in Middle English, such as blew, imbew, but these later were reformed to -ue, and this process was extended to native words (hue, true, clue) which had ended in a vowel and -w. The spelling clue is first attested mid-15c.

The sense shift is originally in reference to the clew of thread given by Ariadne to Theseus to use as a guide out of the Labyrinth in Greek mythology. The purely figurative sense of "that which points the way," without regard to labyrinths, is from 1620s. As something which a bewildered person does not have, by 1948.

Travers'd the dang'rous Labyrinth of Crete;

But still the wandring Passes forc'd his Stay,

Till Ariadne's Clue unwinds the Way

The board game (originally Cluedo) was launched in 1949 in Britain.

"agricultural implement drawn by animals, used to cut ground and turn it up to prepare it for sowing or planting," late Old English ploʒ, ploh "plow; plowland" (a measure of land equal to what a yoke of oxen could plow in a day); in reference to the implement perhaps from a Scandinavian cognate (such as Old Norse plogr "plow;" compare Swedish and Danish plog; Middle English Compendium notes that, "As an element in names, plough is most freq. in the area of the Danelaw"); from Proto-Germanic *plōga- (source also of Old Saxon plog, Old Frisian ploch "plow," Middle Low German ploch, Middle Dutch ploech, Dutch ploeg, Old High German pfluog, German Pflug), a late word in Germanic, of uncertain origin.

Rare as a word alone in Old English, where the usual word for "plow" (n.) was sulh (later sull), which is cognate with Latin sulcus "furrow" (see sulcus).

Old Church Slavonic plugu, Lithuanian plūgas "plow" are Germanic loan-words, as probably is Latin plovus, plovum "plow," a word said by Pliny to be of Rhaetian origin. Boutkan argues against that and points out that, "A priori, the initial p- [in a Germanic word] points to a probable non-IE origin." He also notes the unclear etymological connection with Albanian plúar "plow," which "may have the same, apparently Central-European origin as the Gmc. etymon. On the other hand, the word may represent a North-European innovation which would also be found in OIr. dlongid 'split' < *tlong-." For the usual IE "plow" word, see arable.

The plow and the use of it would have been familiar to most people in England (and later America) from remote antiquity to fairly recent times, and it thus figures largely in image and metaphor; Middle English had (modernized) govern the plow of battles "command an army, wage war;" drive (or hold) the plow "bear burdens; gain the authority;" have weak oxen in the plow "not have energy for the undertaking;" put (one) in pain's plow "force to suffer;" and slightly later plow the sand "labor fruitlessly."

As a name for the star pattern also known as the Big Dipper or Charles's Wain, it is attested by early 15c., perhaps early 14c., also Arthouris Plowe. The three "handle" stars (in the Dipper configuration) generally are seen as the team of oxen pulling the plow, though sometimes they are the plow's handle. 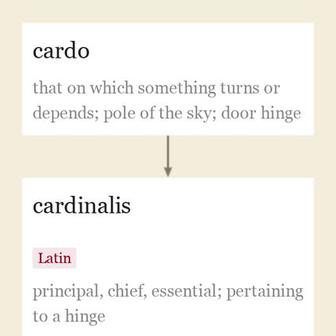 The cardinal points (1540s) are north, south, east, west. The cardinal sins were so called from c. 1600. The cardinal virtues (early 14c.) were divided into natural (justice, prudence, temperance, fortitude) and theological (faith, hope, charity). The natural ones were the original classical ones, which were amended by Christians. But typically in Middle English only the first four were counted as the cardinal virtues:

As one of the four cardinal points of the compass, from c. 1200. Meaning "the eastern part of the world" (from Europe) is from c. 1300. Cold War use of East for "communist states" first recorded 1951. French est, Spanish este are borrowings from Middle English, originally nautical. The east wind in Biblical Palestine was scorching and destructive (as in Ezekiel xvii.10); in New England it is bleak, wet, unhealthful. East End of London so called by 1846; East Side of Manhattan so called from 1871; East Indies (India and Southeast Asia) so called 1590s to distinguish them from the West Indies.

1580s (intransitive), "make one's way by clambering, etc., struggle or wriggle along," also "strive with others or jostle and grasp rudely for a share or for mastery;" a word of obscure origin, perhaps a nasalized variant of scrabble (v.) "to struggle; to scrape quickly." OED points to dialectal scramb "pull together with the hands," a variant of scramp, which is probably a nasalized form of scrape.

Mrs. Goddard was the mistress of a school, ... a real, honest, old fashioned boarding-school, where a reasonable quantity of accomplishments were sold at a reasonable price, and where girls might be sent to be out of the way, and scramble themselves into a little education, without any danger of coming back prodigies. [Jane Austen, "Emma"]

The transitive sense of "to stir or toss together randomly, cause to move confusedly" is from 1822. The transitive sense, in reference to radio signals, telephone voices, etc., "to make unintelligible," is attested from 1927, hence generally "to jumble, muddle." In U.S. football, in reference to a quarterback avoiding tacklers, by 1964. Related: Scrambled; scrambling. Scrambled eggs, broken into a pan, mixed with butter, salt, pepper, etc., and cooked slowly,is by 1843.

member of the supreme college of priests in ancient Rome, 1570s, from Latin pontifex "high priest, chief of the priests," probably from pont-, stem of pons "bridge" (see pons) + -fex "maker," from facere "to do, make" (from PIE root *dhe- "to set, put").

If so, the word originally meant "bridge-maker," or "path-maker." It was felt as such; the sense of "bridge-builder" was in the Medieval Latin word, and Milton uses pontifical (adj.) in this sense. Sense was extended in Church Latin to "a bishop," in Medieval Latin to "the Pope." In Old English, pontifex is glossed in the Durham Ritual (Old Northumbrian dialect) as brycgwyrcende "bridge-maker."

Weekley points out that, "bridge-building has always been regarded as a pious work of divine inspiration." Century Dictionary speculates it had its origins as "having charge of the making or maintenance of a bridge — it is said of the Sublician bridge built over the Tiber by Ancus Marcius." Or the term may be metaphoric of bridging the earthly world and the realm of the gods. Other suggestions trace it to Oscan-Umbrian puntis "propitiary offering," or to a lost Etruscan word; in either case it would have been altered by folk etymology to resemble the Latin for "bridge-maker."

Perhaps it is from Medieval Latin baccalarius "vassal farmer, adult serf without a landholding," one who helps or tends a baccalaria "field or land in the lord's demesne" (according to old French sources, perhaps from an alteration of vacca "a cow" and originally "grazing land" [Kitchin]).

But Wedgwood points out that the baccalarii "were reckoned as rustici, and were bound to certain duty work for their lord. There is no appearance in the passages cited of their having had any military character whatever." (He favored a Celtic origin). Or perhaps it is from Latin baculum "a stick," because the squire would practice with a staff, not a sword. "Perhaps several independent words have become confused in form" [Century Dictionary].

The meaning in English expanded by early 14c. to "young unmarried man" and by late 14c. to "one who has taken the lowest degree in a university." Bachelor party as a pre-wedding ritual is by 1882.

Old English æt, from Proto-Germanic *at (source also of Old Norse, Gothic at, Old Frisian et, Old High German az), from PIE root *ad- "to, near, at." Lost in German and Dutch, which use their equivalent of to; in Scandinavian, however, to has been lost and at fills its place.

At is used to denote relations of so many kinds, and some of these so remote from its primary local sense, that a classification of its uses is very difficult. [OED]

In choosing between at church, in church, etc. at is properly distinguished from in or on by involving some practical connection; a worshipper is at church; a tourist is in the church. In 19c. it was used for points of the compass as regions of a country (at the South) where later tendency was to use in.

The colloquial use of at after where (as in where it's at) is noted in Bartlett (1859). At last is recorded from late 13c.; adverbial phrase at least was in use by 1775. At in Middle English was used freely with prepositions (as in at after, which is in Shakespeare), but this has faded with the exception of at about.