The Greek term [typhos] (smoke, mist, fog) was employed by Hippocrates to define a confused state of the intellect, with a tendency to stupor (stupor attonitus); and in this sense it is aptly applied to typhus fever with its slow cerebration and drowsy stupor. Boissier de Sauvages first (in 1760) called this fever "typhus," and the name was adopted by Cullen of Edinburgh in 1769. Previous to the time of de Sauvages typhus was known as "Pestilential" or "Putrid Fever," or by some name suggested by the eruption, or expressive of the locality in which it appeared, as "Camp," "Jail," "Hospital," or "Ship Fever" (Murchison). [Thomas Clifford, ed., "A System of Medicine," New York, 1897]

1857, "mathematical condition of being at right angles, state or fact of being normal in geometry," from normal + -cy. The word has been associated since 1920 with U.S. president Warren G. Harding (who campaigned that year under the slogan "Return to Normalcy," meaning pre-World War I conditions). Previously normalcy was used mostly in the mathematical sense and the word preferred by purists for "a normal situation" is normality. Harding's use of it was derided during his administration as an example of his much-belittled incompetence with the language (Democratic politician William G. McAdoo Jr. called Harding’s speeches "an army of pompous phrases moving across the landscape in search of an idea").

America’s present need is not heroics, but healing; not nostrums, but normalcy; not revolution, but restoration; not agitation, but adjustment; not surgery, but serenity; not the dramatic, but the dispassionate; not experiment, but equipoise; not submergence in internationality, but sustainment in triumphant nationality. [Harding, "Readjustment" speech, May 24, 1920]

"stupid person," by 1899, American English, from knot (n.) + head (n.). Joe Knothead is the name of a character in an 1857 blackface satire publication. And a local history from Massachusetts published in 1879 describes an old-time character known as knot-head because "[d]uring the hottest days of summer ... he worked bare-headed in the sun ...."

Knothead also was used as a term in cattle and sheep raising, defined in 1922 as "a type of poorly bred, stunted northern cattle, about the size of yearlings, but with heavy horns indicating that they are older." It turns up, however, in an 1849 petition to the Ohio Legislature, recommending a certain person for a court position, in part because he is a knot-head, which the report of the petition notes is a term of praise for a judge because they are asked to untangle knotty legal questions, but which phrase, it adds, "is believed not to be in use among gentlemen in the north part of the State." [Appendix to the Journal of the Ohio House of Representatives, Session of 1848-9]

Proto-Indo-European root meaning "to plait." It is an extended form of root *pel- (2) "to fold."

It is not considered as a place of probation ; for the ultimate salvation of those in purgatory is assured, and the impenitent are not received into purgatory. The souls in purgatory are supposed, however, to receive relief through the prayers of the faithful and through the sacrifice of the mass. The common belief in the Latin Church is that the purgatorial suffering is by fire ; the Greek Church, however, does not determine its nature. [Century Dictionary]

The figurative use for "state of mental or emotional suffering, expiation, etc." is from late 14c., originally especially when due to unrequited love, or, (seemingly paradoxically), marriage (e.g. Lydgate's wyfly purgatorye). In old New England it was used of narrow gorges and steep-sided ravines. Related: Purgatorial; purgatorian. 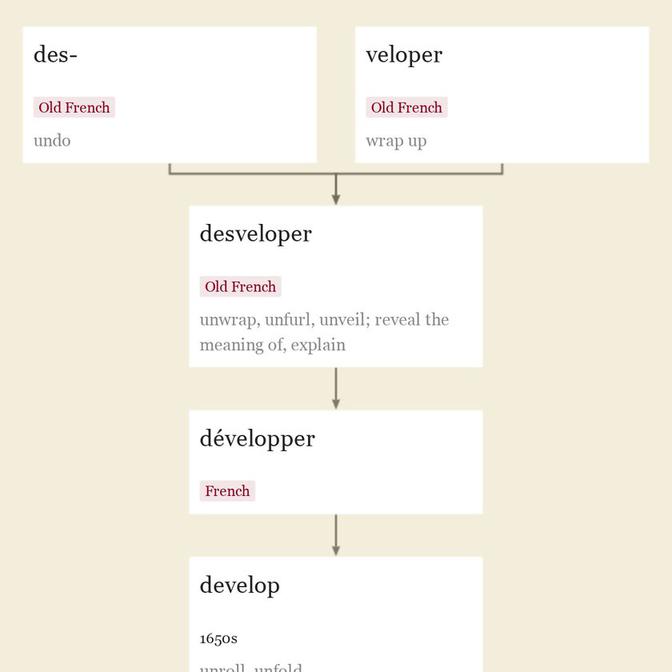 The modern uses are figurative and emerged in English 18c. and after: Transitive meaning "unfold more fully, bring out the potential in" is by 1750; intransitive sense of "come gradually into existence or operation" is by 1793; that of "advance from one stage to another toward a finished state" is by 1843. The intransitive meaning "become known, come to light" is by 1864, American English.

The photographic sense "induce the chemical changes necessary to cause a latent picture or image to become visible" is from 1845; the real estate sense of "convert land to practical or profitable use" is by 1865. Related: Developed; developing.Developing as an adjective in reference to poor or primitive countries or nations that are advancing in economic, industrial, and social conditions is by 1960.

early 15c., "prepared or made in the house," from Old French domestique (14c.) and directly from Latin domesticus "belonging to the household," from domus "house," from PIE *dom-o- "house," from root *dem- "house, household."

From 1610s as "relating to or belonging to the home or household affairs." From 1650s as "attached to home, devoted to home life." Meaning "pertaining to a nation (considered as a family), internal to one's country" is from 1540s. Of animals, "tame, living under the care of humans," from 1610s. Related: Domestically.

The noun meaning "a household servant" is from 1530s (a sense also found in Old French domestique); the full phrase servaunt domestical is attested in English from mid-15c. Domestics, originally "articles of home manufacture," is attested from 1620s; in 19c. U.S. use especially "home-made cotton cloths." Domestic violence is attested from 19c. as "revolution and insurrection;" 1977 as "spouse abuse, violence in the home."

The United States shall guarantee to every State in this Union a Republican form of government, and shall protect each of them against invasion; and on application of the Legislature, or of the executive (when the Legislature cannot be convened) against domestic violence. [Article IV, Section 4, U.S. Constitution, 1787]

Rev. G.S. White said : The Presbytery does not favour the proposition of the Richmond Convention, and thinks the appointment of the Committee unnecessary; yet I suppose, that like the man who had nothing to eat, yet always spread the table, and sat down, and went through the motions—so we, according to our brother, are in honour bound, to appoint the Committee and go through the motions!—[Laughter] [The Presbyterian Magazine, May, 1858]

1796 in the abstract metaphysical sense "belief that reality is made up only of ideas," from ideal (adj.) + -ism. Probably formed on model of French idéalisme. Meaning "tendency to represent things in an ideal form" is from 1829. Meaning "pursuit of the ideal, a striving after the perfect state" (of truth, purity, justice, etc.).

In the philosophical sense the Germans have refined it into absolute (Hegel), subjective (Fichte), objective (von Schelling), and transcendental (Kant).

That the glory of this world in the end is appearance leaves the world more glorious, if we feel it is a show of some fuller splendour : but the sensuous curtain is a deception and a cheat, if it hides some colourless movement of atoms, some spectral woof of impalpable abstractions, or unearthly ballet of bloodless categories. Though dragged to such conclusions, we can not embrace them. Our principles may be true, but they are not reality. They no more make that Whole which commands our devotion, than some shredded dissection of human tatters is that warm and breathing beauty of flesh which our hearts found delightful. [F.H. Bradley, "Principles of Logic," 1883]

late 14c., rendren, rendre, "repeat, say again, recite; translate," from Old French rendre "give back, present, yield" (10c.) and Medieval Latin rendere, from Vulgar Latin *rendere, a variant of Latin reddere "give back, return, restore," from red- "back" (see re-) + combining form of dare "to give" (from PIE root *do- "to give").

The alteration in Vulgar Latin was perhaps simply nasalization or perhaps on analogy of its antonym, prendre "to take" (itself a contraction of prehendere). The irregular retention of -er in a French verb in English is perhaps to avoid confusion with native rend (v.) or by influence of a Middle English legalese noun render "a payment of rent," which is in part from French noun use of the infinitive.

The sense of "reduce," in reference to fats, "clarify by boiling or steaming" also is from late 14c. The meaning "hand over, yield up, deliver" is recorded from c. 1400; sense of "to return" (thanks, a verdict, etc.) is attested from late 15c., as is that of "make or cause to be) in a certain state; the meaning "represent, depict" is attested from 1590s. Related: Rendered; renderer; rendering. Also compare rendition, rent (n.1).