"one, a or an, some," Old English ænig (adjective, pronoun) "any, anyone," literally "one-y," from Proto-Germanic *ainagas (source also of Old Saxon enig, Old Norse einigr, Old Frisian enich, Dutch enig, German einig), from PIE root *oi-no- "one, unique." The -y may have diminutive force here.

[A]ani refers to single entities, amounts, etc., occurring at random or chosen at random, as being convenient, suitable, to one's liking, etc. It is frequently emphatic and generalizing, having the force of 'any whatever, any at all' and 'any and every'. It is common in questions, conditional clauses, and negative statements, but not in affirmative statements (where som is used instead). [The Middle English Compendium]

also colour-blindness, "incapacity for perceiving certain colors due to an absence or weakness of the sensation upon which the power of distinguishing them depends," 1844, the native word, used in England instead of French daltonisme (by 1828), after English chemist John Dalton (1766-1844), who published a description of it in 1794. From color (n.) + blindness.

The continental philosophers have named it Daltonism, a name which has been strongly objected to by almost every English writer who has discussed the subject, on the ground of the inexpediency and undesirableness of immortalizing the imperfections or personal peculiarities of celebrated men by title of this kind. ... The name "Color-Blindness," proposed by Sir D. Brewster, seems in every respect unexceptionable. [Littell's Living Age, vol. v, April 1845]

Noted as inexact (very few people who can see are blind to all color), "the term is applied with much laxity to any constitutional inability to discriminate between colours" [OED]. In figurative use, with reference to race or ethnicity, it is attested from 1866, American English. Related: color-blind (adj.), which is attested from 1854.

But this sense is difficult to reconcile with this animal (unless it is a reference to the ant-eating tongue). The name perhaps belongs to Latin echinus, Greek ekhinos "sea-urchin," originally "hedgehog" (in Greek also "sharp points"), which Watkins explains as "snake-eater," from ekhis "snake." The 1810 Encyclopaedia Britannica gives as the animal's alternative name "porcupine ant-eater." Or, more likely, the name refers to Echidna as the name of a serpent-nymph in Greek mythology, "a beautiful woman in the upper part of her body; but instead of legs and feet, she had from the waist downward, the form of a serpent," in which case the animal was so named for its mixed characteristics (early naturalists doubted whether it was mammal or amphibian).

c. 1300, romaunce, "a story, written or recited, in verse, telling of the adventures of a knight, hero, etc.," often one designed principally for entertainment, from Old French romanz "verse narrative" (Modern French roman), also "the vulgar language," originally an adverb, "in the vernacular language," from Vulgar Latin *romanice scribere "to write in a Romance language" (one developed from Latin instead of Frankish), from Latin Romanicus "of or in the Roman style," from Romanus "Roman" (see Roman).

The sense evolution is because medieval vernacular tales (as opposed to Latin texts) usually told chivalric adventures full of marvelous incidents and heroic deeds. "The spelling with -aunce, -ance was very early adopted in English, probably on the analogy of abstract sbs." [OED].

In reference to literary works, in Middle English often meaning ones written in French but also applied to native compositions. The literary sense was extended by 1660s to "a love story, the class of literature consisting of love stories and romantic fiction." Meaning "imaginative, adventurous quality" first recorded 1801; that of "love affair" is from 1916. Romance novel is attested by 1820. Compare Romance (adj.).

From c. 1300 as "reserve for future use, hold back, store up instead of spending;" hence "keep possession of" (late 14c.). As a quasi-preposition from c. 1300, "without prejudice or harm to," on model of French and Latin cognates.

To save face (1898) first was used among the British community in China and is said to be from Chinese; it has not been found in Chinese, but tiu lien "to lose face" does occur. To save appearances "do something to prevent exposure, embarrassment, etc." is by 1711; earlier save (the) appearances, a term in philosophy that goes back to ancient Greek in reference to a theory which explains the observed facts.

"no longer fresh or elegant but worn as if it were so; in cheap and ostentatious imitation of what is rich or costly," 1670s, adjective use of noun tawdry "silk necktie for women" (1610s), shortened from tawdry lace (1540s), an alteration (with adhesion of the -t- from Saint) of St. Audrey's lace, a necktie or ribbon sold at the annual fair at Ely on Oct. 17 commemorating St. Audrey (queen of Northumbria, died 679). Her association with lace necklaces is that she supposedly died of a throat tumor, which, according to Bede, she considered God's punishment for her youthful stylishness:

"I know of a surety that I deservedly bear the weight of my trouble on my neck, for I remember that, when I was a young maiden, I bore on it the needless weight of necklaces; and therefore I believe the Divine goodness would have me endure the pain in my neck, that so I may be absolved from the guilt of my needless levity, having now, instead of gold and pearls, the fiery heat of a tumour rising on my neck." [A.M. Sellar translation, 1907] 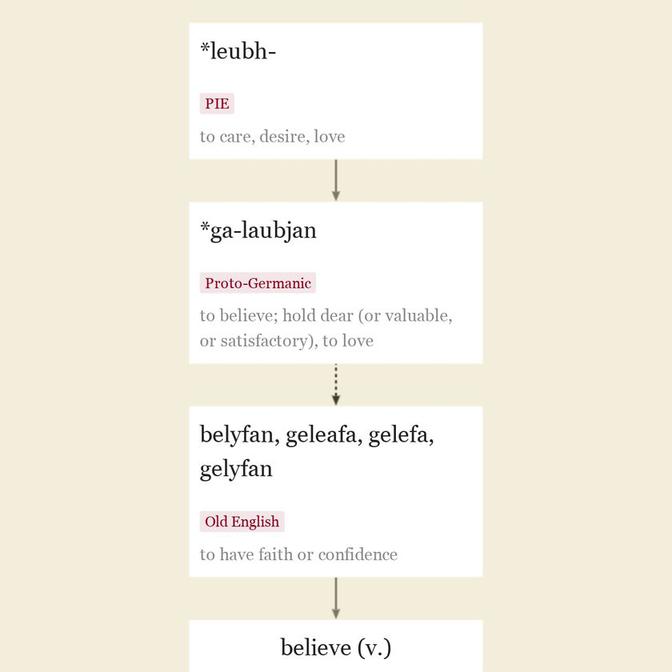 The meaning "be persuaded of the truth of" (a doctrine, system, religion, etc.) is from mid-13c.; the meaning "credit upon the grounds of authority or testimony without complete demonstration, accept as true" is from early 14c. The general sense of "be of the opinion, think" is from c. 1300. Related: Believed (formerly occasionally beleft); believing.

The form beleeve was common till 17c., the spelling then changed, perhaps by influence of relieve, etc. To believe on instead of in was more common in 16c. but now is a peculiarity of theology; believe of also sometimes was used in 17c. The expression believe it or not is attested by 1874; Robert Ripley's newspaper cartoon of the same name is from 1918. Emphatic you better believe attested from 1854.

"lowest and principal timber of a ship or boat," mid-14c., probably from a Scandinavian source (compare Old Norse kjölr "keel," Danish kjøl, Swedish köl), which according to Watkins is from Proto-Germanic *gwele- (3) "to swallow" (see gullet).

OED and Middle English Compendium say this word is separate from the keel that means "a strong, clumsy boat, barge" (c. 1200), which might be instead from Middle Dutch kiel "ship" (cognate with Old English ceol "ship's prow," Old High German kiel, German Kiel "ship"). But the two words have influenced each other or partly merged, and Barnhart calls them cognates. Keel still is used locally for "flat-bottomed boat" in the U.S. and England, especially on the Tyne.

In historical writing about the Anglo-Saxons, it is attested from 17c. as the word for an early form of long-boat supposedly used by them in the crossing, based on ceolum in the Anglo-Saxon Chronicle and Medieval Latin cyulis (Gildas). Old English also used simply scipes botm or bytme. On an even keel (1560s) is "in a level, horizontal position," hence figurative extension with reference to stability.

type of cereal plant, Middle English ote, from Old English ate (plural atan) "grain of the oat plant, wild oats," a word of uncertain origin, possibly from Old Norse eitill "nodule," denoting a single grain, itself of unknown origin. The English word has cognates in Frisian and some Dutch dialects. Famously defined by Johnson as, "A grain, which in England is generally given to horses, but in Scotland supports the people." Related: Oats.

The usual Germanic name is derived from Proto-Germanic *khabran (source also of Old Norse hafri, Dutch haver, source of haversack). Figurative wild oats "youthful excesses" (the notion is "crop that one will regret sowing") is attested by 1560s, in reference to the folly of sowing these instead of good grain. Hence, feel (one's) oats "be lively," 1831, originally American English.

That wilfull and vnruly age, which lacketh rypenes and discretion, and (as wee saye) hath not sowed all theyr wyeld Oates. [Thomas Newton, "Lemnie's Touchstone of complexions," 1576]

Fred: I still want to sow some wild oats!

Lamont: At your age, you don't have no wild oats, you got shredded wheat.