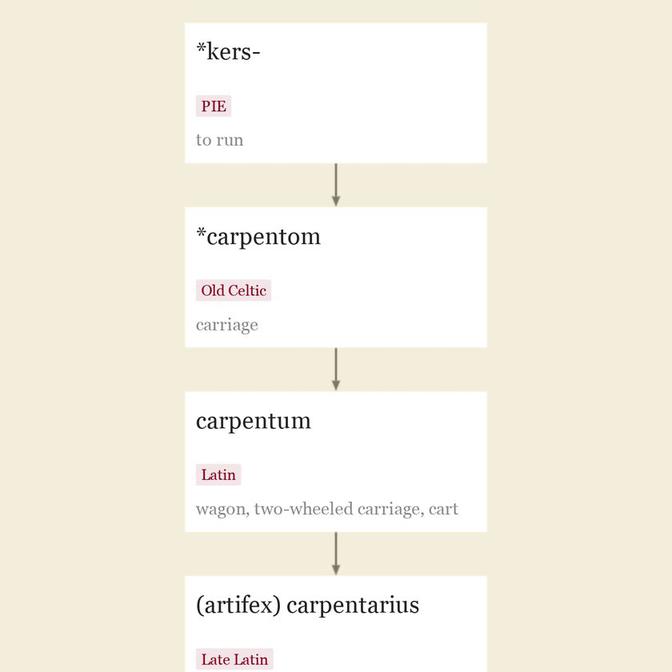 "artificer in timber, one who does the heavier sort of wood-working," c. 1300 (attested from early 12c. as a surname), from Anglo-French carpenter, Old North French carpentier (Old French and Modern French charpentier), from Late Latin (artifex) carpentarius "wagon (maker), carriage-maker" (in Medieval Latin "carpenter," properly an adjective, "pertaining to a cart or carriage," from Latin carpentum "wagon, two-wheeled carriage, cart." This word is from Gaulish, from Old Celtic *carpentom (compare Old Irish carpat, Gaelic carbad "carriage"), which probably is related to Gaulish karros "chariot" (source of car), from PIE root *kers- "to run."

Applied in Latin to the waxing moon, luna crescens, but subsequently in Latin mistaken to refer to the shape, not the stage. The original Latin sense is preserved in crescendo.

Meaning "moon's shape in its first or last quarter" is from mid-15c. in English. Meaning "small roll of bread made in the form of a crescent" is from 1886. Adjectival sense of "shaped like the crescent moon" is from c. 1600 (earlier it meant "increasing, growing," 1570s).

A badge or emblem of the Turkish sultans (probably chosen for its suggestion of "increase"); figurative sense of "Muslim political power" is from 1580s, but modern writers often falsely associate it with the Saracens of the Crusades or the Moors of Spain. Horns of the waxing moon are on the viewer's left side; those of the waning moon are on his right.

Related entries & more
grand-
a special use of grand (adj.) in genealogical compounds, originally with the sense of "a generation older than," first attested c. 1200, in Anglo-French graund dame "grandmother," also grandsire (late 13c.), from such use of Old French grand-, which perhaps is modeled on Latin avunculus magnus "great uncle." The partly-Englished grandmother, grandfather are from 15c. Other such words in European languages are formed with the adjectives for "old" or "best" (Danish bedstefar) or as diminutives or pet names (Greek pappos, Welsh taid). The French formation also is the model for such words in German and Dutch. Spanish abuelo is from Latin avus "grandfather" (from PIE *awo- "adult male relative other than the father;" see uncle), via Vulgar Latin *aviolus, a diminutive or adjective substitution for the noun.

late Old English (replacing Old English fers, an early West Germanic borrowing directly from Latin), "line or section of a psalm or canticle," later "line of poetry" (late 14c.), from Anglo-French and Old French vers "line of verse; rhyme, song," from Latin versus "a line, row, line of verse, line of writing," from PIE root *wer- (2) "to turn, bend." The metaphor is of plowing, of "turning" from one line to another (vertere = "to turn") as a plowman does.

The English New Testament first was divided fully into verses in the Geneva version (1550s). Meaning "metrical composition" is recorded from c. 1300; as the non-repeating part of a modern song (between repetitions of the chorus) by 1918.

The Negroes say that in form their old songs usually consist in what they call "Chorus and Verses." The "chorus," a melodic refrain sung by all, opens the song; then follows a verse sung as a solo, in free recitative; the chorus is repeated; then another verse; chorus again;—and so on until the chorus, sung for the last time, ends the song. [Natalie Curtis-Burlin, "Negro Folk-Songs," 1918]

early 14c., "to bear or convey, take along or transport," from Anglo-French carier "to transport in a vehicle" or Old North French carrier "to cart, carry" (Modern French charrier), from Gallo-Roman *carrizare, from Late Latin carricare, from Latin carrum originally "two-wheeled Celtic war chariot," from Gaulish (Celtic) karros, from PIE *krsos, from root *kers- "to run."

To carry out "conduct to completion" is from c. 1600. To carry it off "brazen a thing out" is from 1704; carried off as a euphemism for "killed" is from 1670s. To be carried (away) in the figurative sense "transported, having the attention fully absorbed" is from 1560s. Carrying capacity is attested from 1836. Carry-castle (1590s) was an old descriptive term for an elephant.

early 14c., "a spherical body; that which has roundness," from round (adj.) and Anglo-French rount and Old French reont, roond. Compare Dutch rond, Danish and Swedish rund, German runde, all nouns from adjectives.

Meaning "quantity of liquor served to a company at one time" is from 1630s; that of "single bout in a fight or boxing match" is from 1812; "single discharge of a firearm" is from 1725. Sense of "recurring session of meetings or negotiations" is from 1964. Theatrical sense (in phrase in the round) in reference to a stage surrounded by the audience is recorded from 1944.  To make the rounds "be passed along by a whole set of persons" is by 1967; the earlier form was go the round (1660s).

Also in Middle English "verbal contention, debate; legal proceedings, litigation, accusation." Phrase a question of meaning "a dispute about" is from early 15c.

No question "undoubtedly" is from mid-15c; no questions asked "accountability not required" is from 1879 (especially in newspaper advertisements seeking the return of something lost or stolen). To be out of the question (c. 1700) is to be not pertinent to the subject, hence "not to be considered." To be in question "under discussion or consideration" is from 1610s.

Question mark is from 1849, sometimes also question stop (1862), earlier interrogation point (1590s). The figurative sense of "something about which there is uncertainty or doubt" is from 1869.

Originally in Anglo-Saxon times a land measure of roughly 5 meters (a length later called rod, pole, or perch). Modern measure of "three feet" is attested from late 14c. (earlier rough equivalent was the ell of 45 inches, and the verge). In Middle English and after, the word also was a euphemism for "penis" (as in "Love's Labour's Lost," V.ii.676). Slang meaning "one hundred dollars" first attested 1926, American English. Middle English yerd (Old English gierd) also was "yard-land, yard of land," a varying measure but often about 30 acres or a quarter of a hide.

mid-14c., ambre grice "ambergris; perfume made from ambergris," from the phrase in Old French (13c.) and Medieval Latin, from Arabic 'anbar "ambergris, morbid secretion of sperm-whale intestines used in perfumes and cookery" (see ambergris), which was introduced in the West at the time of the Crusades. Arabic -nb- often is pronounced "-mb-."

In Europe, amber was extended to fossil resins from the Baltic (late 13c. in Anglo-Latin; c. 1400 in English), and this has become the main sense as the use of ambergris has waned. Perhaps the perceived connection is that both were found washed up on seashores. Or perhaps it is a different word entirely, of unknown origin. Formerly they were distinguished as white or yellow amber for the Baltic fossil resin and ambergris "gray amber;" French distinguished the two substances as ambre gris and ambre jaune.

Remarkable for its static electricity properties, Baltic amber was known to the Romans as electrum (compare electric). Amber as an adjective in English is from c. 1500; as a color name 1735. In the Old Testament it translates Hebrew chashmal, a shining metal.