"ornamental ring for an ankle," 1810, from ankle, with diminutive suffix -let, after bracelet, etc.

late 14c., "to place (oneself) under the control of another, to yield oneself," from Latin submittere "to yield, lower, let down, put under, reduce," from sub "under" (see sub-) + mittere "let go, send" (see mission). Transitive sense of "refer to another for consideration" first recorded 1550s. Related: Submitted; submitting.

"nosebleed," 1793, medical Latin, as if from Greek *epistaxis, a false reading for epistagmos, from epi "upon" (see epi-) + stazein "to let fall in drops" (see stalactite).

"causing or resulting in death," 1580s, from Late Latin lethalis, alteration of Latin letalis "deadly, fatal," from lethum/letum "death," a word of uncertain origin. According to de Vaan, from Proto-Italic *leto-, which is perhaps a noun from a PIE past participle of a verb meaning "let, let go," on the notion of death as "a letting go." If so, related to Old Church Slavonic leto "summer, year" (from notion of "going"), Russian leto "summer," (pl.) "age, years;" Russian let' (archaic) "it is possible, allowed;" Old Norse lað, Old English læð "land," Gothic unleds "poor." The form altered in Late Latin by association with lethes hydor "water of oblivion" in Hades in Greek mythology, from Greek lethe "forgetfulness" (see Lethe).

also dribblet, "small piece or part, an inconsiderable part of a whole," 1590s, diminutive of drib (n.) with -let. 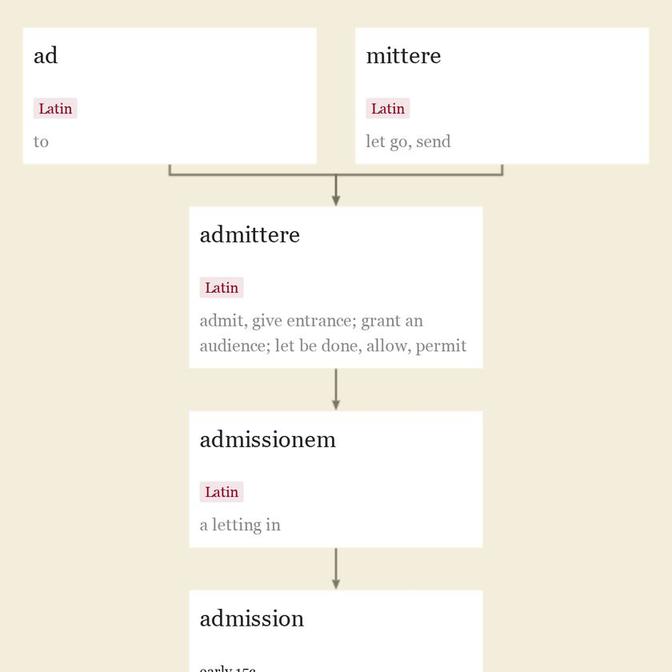 The meaning "an acknowledging" is from 1530s. The literal sense of "act of allowing to enter, admittance," is from 1620s. As short for admission price, by 1792.