c. 1300, "an evil female spirit afflicting men (or horses) in their sleep with a feeling of suffocation," compounded from night + mare (n.3) "goblin that causes nightmares, incubus." The meaning shifted mid-16c. from the incubus to the suffocating sensation it causes. Sense of "any bad dream" is recorded by 1829; that of "very distressing experience" is from 1831.

Cognate with Middle Dutch nachtmare, German Nachtmahr. An Old English word for it was niht-genga. An 11c. gloss gives, for Latin Echo, Anglo-Saxon wudumær, a "wood-mere."

In the Anglo-Saxon superstitions, the Echo was supposed to be a spirit which dwelt in the wilds and mocked people who passed there, as the night-mare tormented people in bed. [Thomas Wright, "Anglo-Saxon and Old English Vocabularies," 1884]

1844, "devotion to one's country, national spirit or aspirations, desire for national unity, independence, or prosperity;" see nationalist + -ism; in some usages from French nationalisme. Earlier it was used in a theological sense of "the doctrine of divine election of nations" (1836). Later it was used in a sense of "doctrine advocating nationalization of a country's industry" (1892). An earlier word for "devotion or strong attachment to one's own country" was nationality (1772).

To place the redemptive work of the Christian Faith in social affairs in its proper setting, it is necessary to have clearly in mind at the outset that the consciousness of "the nation" as the social unit is a very recent and contingent experience. It belongs to a limited historical period and is bound up with certain specific happenings, theories of society and attitudes to life as a whole. [Vigo A. Demant, "God, Man and Society"]

Replaced Old English þolian, þrowian. Meaning "submit meekly to" is from early 14c. Meaning "undergo, be subject to, be affected by, experience; be acted on by an agent" is from late 14c. Related: Suffered; sufferer; suffering. Suffering ______! as an exclamation is attested from 1859.

For ye suffre foles gladly because that ye youreselves are wyse. [II Corinthians vi in Tyndale, 1526]

1781, coined by Jeremy Bentham (1748-1832) from utility + -arian on the model of + unitarian, etc. One guided by the doctrine of the greatest happiness for the greatest number. From 1802 as an adjective; in the general sense "having regard to utility rather than beauty," from 1847.

[Bentham] had a phrase, expressive of the view he took of all moral speculations to which his method had not been applied, or (which he considered as the same thing) not founded on a recognition of utility as the moral standard ; this phrase was "vague generalities." Whatever presented itself to him in such a shape, he dismissed as unworthy of notice, or dwelt upon only to denounce as absurd. He did not heed, or rather the nature of his mind prevented it from occurring to him, that these generalities contained the whole unanalyzed experience of the human race. [John Stuart Mill, "The Works of Jeremy Bentham," London and Westminster Review, August 1838]

1590s, "one who is the offspring of a European and a black African," from Spanish or Portuguese mulato "of mixed breed," literally "young mule," from mulo "mule," from Latin mulus (fem. mula) "mule" (see mule (n.1)); possibly in reference to hybrid origin of mules (compare Greek hēmi-onos "a mule," literally "a half-ass;" as an adjective, "one of mixed race"). As an adjective from 1670s. Fem. mulatta is attested from 1620s; mulattress from 1805.

American culture, even in its most rigidly segregated precincts, is patently and irrevocably composite. It is, regardless of all the hysterical protestations of those who would have it otherwise, incontestibly mulatto. Indeed, for all their traditional antagonisms and obvious differences, the so-called black and so-called white people of the United States resemble nobody else in the world so much as they resemble each other. [Albert Murray, "The Omni-Americans: Black Experience & American Culture," 1970]

Sense of "waterless, treeless region of considerable extent" was in Middle English and gradually became the main meaning. Classical Latin indicated this idea with deserta, plural of desertus. Commonly spelled desart in 18c., which is unetymological, but it avoids confusion with the two other senses of the word.

Every important worker will report what life there is in him. It makes no odds into what seeming deserts the poet is born. Though all his neighbors pronounce it a Sahara, it will be a paradise to him; for the desert which we see is the result of the barrenness of our experience. [Thoreau, Journal, May 6, 1854]

1640s, "a gathering into a bundle," verbal noun from bundle (v.). The meaning "sharing a bed for the night, fully dressed, wrapped up with someone of the opposite sex" (1782) is a former local custom in New England (especially Connecticut and southeastern Massachusetts). It was noted there from about 1750s and often regarded by outsiders as grossly immoral, but New Englanders wrote defenses of it and claimed it was practiced elsewhere, too. It seems to have died out with the 18th century.

I am no advocate for temptation; yet must say, that bundling has prevailed 160 years in New England, and, I verily believe, with ten times more chastity than the sitting on a sofa. I had daughters, and speak from near forty years' experience. Bundling takes place only in cold seasons of the year—the sofa in summer is more dangerous than the bed in winter. [The Rev. Samuel Peters, "A general history of Connecticut," 1782] 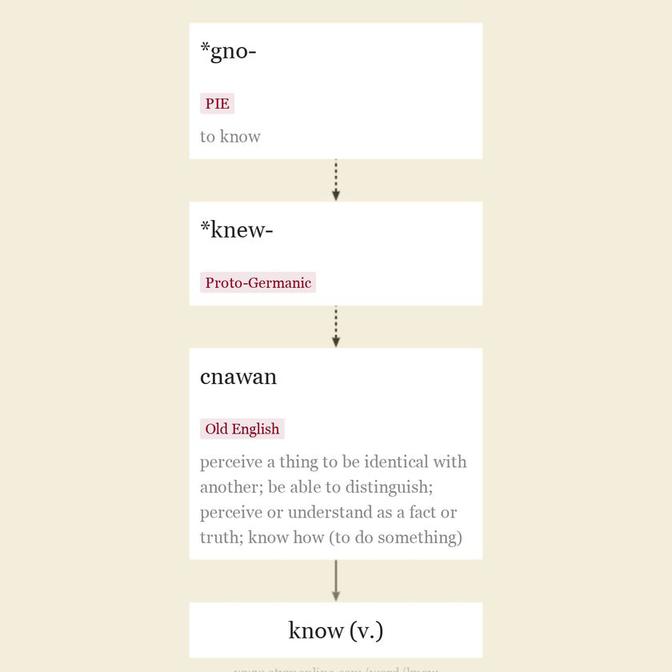 Old English cnawan (class VII strong verb; past tense cneow, past participle cnawen), "perceive a thing to be identical with another," also "be able to distinguish" generally (tocnawan); "perceive or understand as a fact or truth" (opposed to believe); "know how (to do something)," from Proto-Germanic *knew- (source also of Old High German bi-chnaan, ir-chnaan "to know"), from PIE root *gno- "to know."

For pronunciation, see kn-. Once widespread in Germanic, the verb is now retained there only in English, where it has widespread application, covering meanings that require two or more verbs in other languages (such as German wissen, kennen, erkennen and in part können; French connaître "perceive, understand, recognize," savoir "have a knowledge of, know how;" Latin scire "to understand, perceive," cognoscere "get to know, recognize;" Old Church Slavonic znaja, vemi). The Anglo-Saxons also used two distinct words for this, the other being witan (see wit (v.)).

From c. 1200 as "to experience, live through." Meaning "to have sexual intercourse with," also found in other modern languages, is attested from c. 1200, from the Old Testament (Genesis iv.1). Attested from 1540s in colloquial phrases suggesting cunning or savvy (but often in the negative); to not know one's ass from one's elbow is from 1930.

You know as a parenthetical filler is from 1712, but it has roots in 14c. You know as a euphemism for a thing or situation unmentionable is from 1867; you-know-who for a person it is thought best not to name (but implying the hearer knows) is from 1840.

As an expression of surprise, what do you know attested by 1914. Don't I know it in the opposite sense ("you need not tell me") is by 1841. You never know as a response to something unexpected is attested from 1924.

Used generally from c. 1300 in reference to native sayings, "short pithy sentence, often repeated colloquially, expressing a well-known truth or a common fact ascertained by experience or observation; a popular saying which briefly and forcibly expresses some practical precept; an adage; a wise saw: often set forth in the guise of metaphor and in the form of rime, and sometimes alliterative" [Century Dictionary].

c. 1300, gessen "to infer from observation, perceive, find out; form an opinion, judge, decide, discern; evaluate, estimate the number, importance, etc. of," perhaps from Scandinavian (compare Middle Danish gitse, getze "to guess," Old Norse geta "guess, get"), or from or influenced by Middle Dutch gessen, Middle Low German gissen "to guess," all from Proto-Germanic *getan "to get" (see get (v.)).

The prehistoric sense evolution then would be from "get," to "take aim at," to "to estimate." Meaning "to hit upon the right answer" is from 1540s. The spelling with gu- is late 16c., sometimes attributed to Caxton and his early experience as a printer in Bruges. Related: Guessed; guessing.

Guessing game attested from 1650s. To keep (someone) guessing "keep him in a state of suspense" is from 1896, American English.

[T]he legitimate, English sense of this word is to conjecture; but with us, and especially in New England, it is constantly used in common conversation instead of to believe, to suppose, to think, to imagine, to fancy. [Bartlett, "Dictionary of Americanisms," 1848]