"remove the entrails of, disembowel," c. 1600 (figurative); 1620s (literal), from Latin evisceratus, past participle of eviscerare "to disembowel," from assimilated form of ex "out" (see ex-) + viscera "internal organs" (see viscera). Sometimes used 17c. in a figurative sense of "to bring out the deepest secrets of." Related: Eviscerated; eviscerating.

1570s, "affecting inward feelings," from French viscéral and directly from Medieval Latin visceralis "internal," from Latin viscera, plural of viscus "internal organ, inner parts of the body," of unknown origin. The bowels were regarded as the seat of emotion. The figurative sense vanished after 1640 and the literal sense is first recorded in 1794. The figurative sense was revived 1940s in arts criticism.

c. 1400, plukke, "a pull, a tug, act of plucking," from pluck (v.). Meaning "courage, boldness, determined energy" (1785), originally in pugilism slang, is a figurative use from the earlier meaning "heart, viscera" (1610s) as that which is "plucked" from slaughtered livestock in preparing the carcass for market. This sense also was perhaps influenced by figurative use of the verb in pluck up (one's courage, etc.), attested from c. 1300. 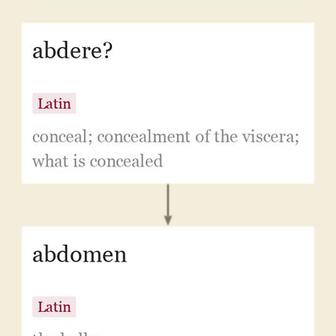 The original meaning is obsolete. The sense of "beast of the chase when pursued or slain in a hunt" is by 1610s, also "any object of eager pursuit;" earlier "bird targeted by a hawk or other raptor" (late 15c.).

Transferred sense of "the viscera as the seat of emotions" is from late 14c.; especially "inner parts as the seat of pity or kindness," hence "tenderness, compassion." Greek splankhnon (from the same PIE root as spleen) was a word for the principal internal organs, which also were felt in ancient times to be the seat of various emotions. Greek poets, from Aeschylus down, regarded the bowels as the seat of the more violent passions such as anger and love, but by the Hebrews they were seen as the seat of tender affections, especially kindness, benevolence, and compassion. Splankhnon was used in Septuagint to translate a Hebrew word, and from thence early Bibles in English rendered it in its literal sense as bowels, which thus acquired in English a secondary meaning of "pity, compassion" (late 14c.). But in later editions the word often was translated as heart. Bowel movement is attested by 1874.