also vice president, 1570s, "one who acts as a deputy for a president," from vice- + president. Made into an official rank and given a different meaning (vice = "next in rank to") in the U.S. Constitution (1787).

There seems to be no doubt of my election as V[ice] Pres[iden]t. It will have at least one advantage, that of permitting me to devote more of my time to my private affairs. [John C. Calhoun, letter to wife, Nov. 12, 1824]

word-forming element meaning "deputy, assistant, substitute," also "instead of, in place of," 15c., from Latin vice "in place of," ablative of vicis "a change, a turn, interchange alternation" (from PIE root *weik- (2) "to bend, to wind"). In Middle English sometimes borrowed in Old French form vis-, vi-.

Horace and Aristotle have already spoken to us about the virtues of their forefathers and the vices of their own times, and through the centuries, authors have talked the same way. If all this were true, we would be bears today. [Montesquieu, "Pensées"] 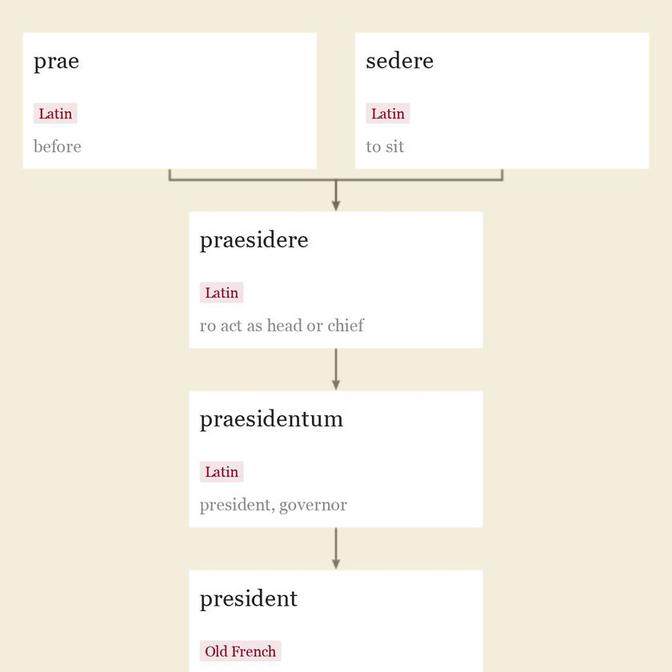 late 14c., "appointed governor of a province; chosen leader of a body of persons," from Old French president and directly from Latin praesidentum (nominative praesidens) "president, governor," noun use of present participle of praesidere "to act as head or chief" (see preside). In Middle English of heads of religious houses, hospitals, almshouses, colleges and universities.

First use for "chief executive officer of a republic" is in U.S. Constitution (1787), from earlier American use for "officer in charge of the Continental Congress" (1774), earlier of individual colonies (Virginia, 1608), a sense derived from that of "chosen head of a meeting or group of persons," which is from Middle English. During and immediately after the Revolution the chief magistrates of certain states (New Hampshire, Pennsylvania, Delaware, South Carolina) took the title, which eventually reverted to governor.

It had been used of chief officers of banks from 1781. Slang shortening prez is recorded from 1883. Fem. form presidentess is attested from 1763.

"the order being changed," c. 1600, Latin, from vice, ablative of vicis "a change, alternation, alternate order" (from PIE root *weik- (2) "to bend, to wind") + versa, feminine ablative singular of versus, past participle of vertere "to turn, turn about" (from PIE root *wer- (2) "to turn, bend"). "The phrase has the complete force of a proposition, being as much as to say that upon a transposition of antecedents the consequents are also transposed" [Century Dictionary].

1949, American English, apparently coined from V.P., abbreviation of vice president, perhaps modeled on jeep, which was then in vogue. Introduced by Alben W. Barkley (1877-1956), Harry Truman's vice president. According to the "Saturday Evening Post," "his grandchildren, finding Vice-President too long, call him that." The magazines quickly picked it up, especially when the 71-year-old Barkley married a 38-year-old widow (dubbed the Veepess).

Barkley says word "Veep" is not copyrighted, and any vice president who wants to can use it. But he hopes not many will. [U.S. Department of State wireless bulletin, 1949]

surname, a spelling variant of Nickson, literally "son of (a man named) Nick, English familiar form of Nicholas. Nixonian is from 1959 in reference to the ways and means of U.S. vice president (later president) Richard M. Nixon (1913-1994). Related: Nixonite; Nixonomics.