c. 1400, "devoted to or relating to home life;" 1560s as "living with others," from French social (14c.) and directly from Latin socialis "of companionship, of allies; united, living with others; of marriage, conjugal," from socius "companion, ally," probably originally "follower," from PIE *sokw-yo-, suffixed form of root *sekw- (1) "to follow." Compare Old English secg, Old Norse seggr "companion," which seem to have been formed on the same notion). Related: Socially.

Sense of "characterized by friendliness or geniality" is from 1660s. Meaning "living or liking to live with others; companionable, disposed to friendly intercourse" is from 1720s. Meaning "of or pertaining to society as a natural condition of human life" first attested 1695, in Locke. Sense of "pertaining to fashionable society" is from 1873.

Social climber is from 1893; social work is 1890; social worker 1886. Social drinking first attested 1807. Social studies as an inclusive term for history, geography, economics, etc., is attested from 1916. Social security "system of state support for needy citizens" is attested from 1907 (the Social Security Act was passed by U.S. Congress in 1935). Social butterfly is from 1867, in figurative reference to "flitting."

I must introduce a parenthetical protest against the abuse of the current term 'social justice'. From meaning 'justice in relations between groups or classes' it may slip into meaning a particular assumption as to what these relations should be; and a course of action might be supported because it represented the aim of 'social justice', which from the point of view of 'justice' was not just. The term 'social justice' is in danger of losing its rational content—which would be replaced by a powerful emotional charge. I believe that I have used the term myself: it should never be employed unless the user is prepared to define clearly what social justice means to him, and why he thinks it just. [T.S. Eliot, footnote in "Notes Towards the Definition of Culture," 1948] 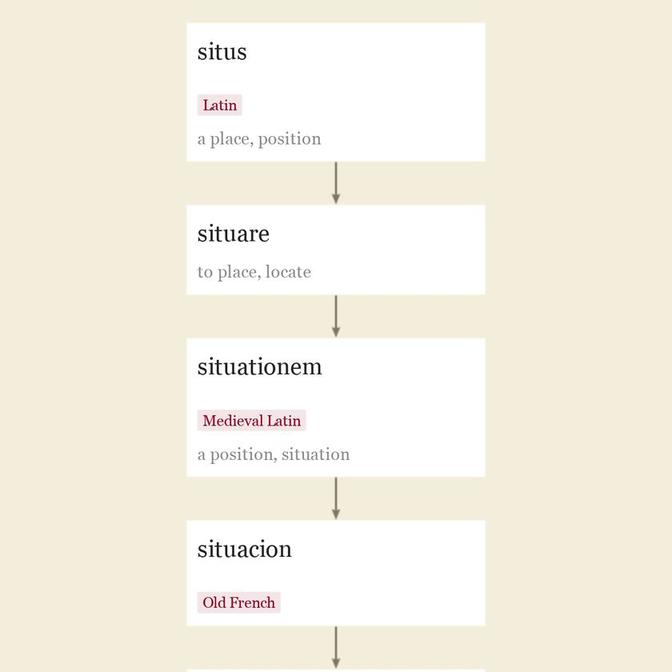 early 15c., situacioun, "place, position, or location," from Old French situacion or directly from Medieval Latin situationem (nominative situatio) "a position, situation," noun of action from past-participle stem of situare "to place, locate," from Latin situs "a place, position" (from PIE root *tkei- "to settle, dwell, be home"). Meaning "state of affairs" is from 1710; meaning "employment post" is from 1803.

Classical Latin condicio was confused in Late Latin with conditio "a making," from conditus, past participle of condere "to put together." The sense evolution in Latin apparently was from "stipulation" to "situation, mode of being."

Meaning "rank or state with respect to ordered society" is from late 14c. in English. From the notion of "prerequisite" comes the sense of "a restricting or limiting circumstance" (late 14c.). Also in Middle English "personal character, disposition" (mid-14c.).

also psycho-social, "pertaining to or involving the influence of social factors on a person's mind or behavior," 1891, from psycho- + social (adj.).