"mud transfused with saline or other ingredients at mineral springs, into which patients suffering from rheumatism, etc., immerse themselves," 1798, from mud (n.) + bath (n.).

1780, "pertaining to hospital patients or hospital care," from clinic + -al (2). Meaning "coldly dispassionate" (like a medical report) is recorded from 1928. The earlier adjective was clinic "of or pertaining to the sick-bed" (1620s). Related: Clinically.

Among the diseases of the ear, one of the most prevalent is the Paracusis imaginaria, to which both sexes are equally liable; and another variety of the same tribe, more frequent among female patients, called the Susurrus criticus, or Scandal-buzz. [The Lounger, Dec. 23, 1786]

1620s, "bedridden person, one confined to his bed by sickness," from French clinique (17c.), from Latin clinicus "physician that visits patients in their beds," from Greek klinike (techne) "(practice) at the sickbed," from klinikos "of the bed," from kline "bed, couch, that on which one lies," from suffixed form of PIE root *klei- "to lean."

Also "one who defers baptism until the death-bed" (1660s). Sense of "private hospital" is from 1884, from German Klinik in this sense, itself from French clinique, via the notion of "bedside medical education, examination of a patient by an instructor in the presence of students." The modern sense thus reverses the classical one, in which the "clinic" came to the patient. General sense of "conference for group instruction in something" is from 1919.

c. 1300, sirgirie, "medical treatment of an operative nature, such as cutting-operations, setting of fractures, etc.," from Old French surgerie, surgeure, contraction of serurgerie, from Late Latin chirurgia "surgery," from Greek kheirourgia, from kheirourgos "working or done by hand," from kheir "hand" (from PIE root *ghes- "the hand") + ergon "work" (from PIE root *werg- "to do").

According to OED, the British sense of "session at which a Member of Parliament (or other public servant) is available locally to be consulted by constituents" is by 1951, from an extended sense in medical practice of "regular session at which a doctor receives patients for consultation" in a room or den set aside for that purpose called a surgery (by 1846). The word has been extended in Britain to other free consultations for advice. 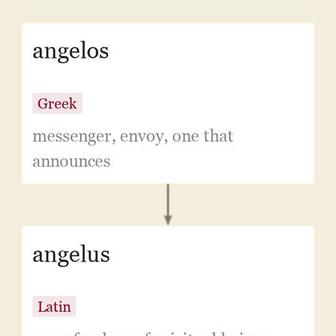 "one of a class of spiritual beings, attendants and messengers of God," a c. 1300 fusion of Old English engel (with hard -g-) and Old French angele. Both are from Late Latin angelus, from Greek angelos, literally "messenger, envoy, one that announces," in the New Testament "divine messenger," which is possibly related to angaros "mounted courier," both from an unknown Oriental word (Watkins compares Sanskrit ajira- "swift;" Klein suggests Semitic sources).

The Greek word was used in Scriptural translations for Hebrew mal'akh (yehowah) "messenger (of Jehovah)," from base l-'-k "to send." An Old English word for it was aerendgast, literally "errand-spirit."

by 1839 as "hospital, usually private, for the treatment of invalids, convalescents, etc., who might benefit from open air;" by 1842 as "place to which people go for the sake of health or to regain health;" Modern Latin, noun use of neuter of Late Latin adjective sanitorius "health-giving," from Latin sanat-, past-participle stem of sanare "to heal," from sanus "well, healthy, sane" (see sane).

Latin sanare is the source of Italian sanare, Spanish sanar. Century Dictionary [1895] notes it was "specifically applied to military stations on the mountains or tablelands of tropical countries, with climates suited to the health of Europeans."

Many of his patients had asked him what this hard word sanatorium meant, and he explained to them, that it was a lodging-house, which was, in fact, the proper alias of sanatorium, and that it was to the benefit of Dr. Arnott's stove and of regularity in the time of giving medicine. [from report on a "Debate on the Sanatorium" in The Lancet, Jan. 11, 1840]

1800, used by British physician Edward Jenner (1749-1823) for the technique he publicized of preventing smallpox by injecting people with the similar but much milder cowpox virus (variolae vaccinae), from vaccine (adj.) "pertaining to cows, from cows" (1798), from Latin vaccinus "from cows," from vacca "cow," a word of uncertain origin. A mild case of cowpox rendered one immune thereafter to smallpox. "The use of the term for diseases other than smallpox is due to Pasteur" [OED].

The earlier 18c. method of smallpox protection in England was by a kind of inoculation called  variolation (from variola, the medical Latin word for "smallpox"). There are two forms of smallpox: a minor one that killed 2% or less of the people who got it, and a virulent form that had about a 30% mortality rate and typically left survivors with severe scarring and often blinded them. Those who got the minor form were noted to be immune thereafter to the worse. Doctors would deliberately infect healthy young patients with a local dose of the minor smallpox, usually resulting in a mild case of it at worst, to render them immune to the more deadly form. Jenner's method was safer, as it involved no smallpox exposure.