Latin liber (from Proto-Italic *lufro-) was originally "the inner bark of trees," and perhaps is from PIE *lubh-ro- "leaf, rind," a derivative of the PIE root *leub(h)- "to strip, to peel" (see leaf (n.)). Comparing Albanian labë "rind, cork;" Lithuanian luobas "bast," Latvian luobas "peel," Russian lub "bast," de Vaan writes that, "for want of a better alternative, we may surmise that liber is cognate with *lubh- and goes back to a PIE word or a European word 'leaf, rind.'" 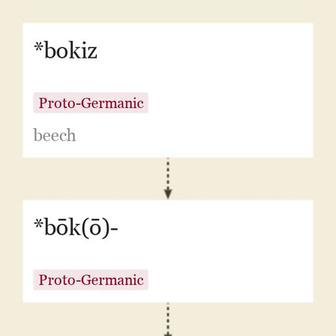 Old English boc "book, writing, written document," generally referred (despite phonetic difficulties) to Proto-Germanic *bōk(ō)-, from *bokiz "beech" (source also of German Buch "book" Buche "beech;" see beech), the notion being of beechwood tablets on which runes were inscribed; but it may be from the tree itself (people still carve initials in them).

Latin and Sanskrit also have words for "writing" that are based on tree names ("birch" and "ash," respectively). And compare French livre "book," from Latin librum, originally "the inner bark of trees" (see library). The Old English word originally meant any written document. The sense gradually narrowed by early Middle English to "a written work covering many pages fastened together and bound," also "a literary composition" in any form, of however many volumes. Later also "bound pages," whether written on or not. In 19c. it also could mean "a magazine;" in 20c. a telephone directory.

The use of books or written charters was introduced in Anglo-Saxon times by the ecclesiastics, as affording more permanent and satisfactory evidence of a grant or conveyance of land than the symbolical or actual delivery of possession before witnesses, which was the method then in vogue. [Century Dictionary]