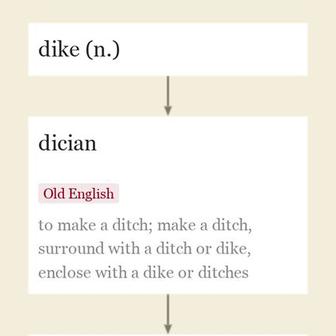 "to make a ditch," Old English dician "make a ditch, surround with a ditch or dike, enclose with a dike or ditches," from the source of dike (n.). Related: Diked; diking. 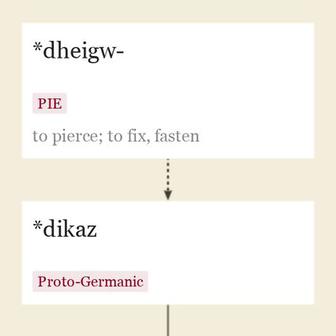 This is the northern variant of the word that in the south of England yielded ditch (n.). At first "an excavation," later applied to the ridge or bank of earth thrown up in excavating a ditch or canal (late 15c.), a sense development paralleled by the cognate words in many languages, though naturally it occurred earlier in Dutch and Frisian. From 1630s specifically as "ridge or bank of earth to prevent lowlands from being flooded." In geology, "vertical fissure in rocks filled with later material which made its way in while molten" (1835).

The sense shifted in Norman French from the castle mound to the ditch dug around it. For a similar evolution, compare ditch (n.) and dike. As a verb, "to surround with a moat," early 15c. Related: Moated.

As the earth dug out of the ground in making a trench is heaped up on the side, the ditch and the bank are constructed by the same act, and it is not surprising that the two should have been confounded under a common name. [Hensleigh Wedgwood, "A Dictionary of English Etymology," 1859]

c. 1200, diggen, "to make a ditch or other excavation," a word of uncertain origin, perhaps related to dike and ditch, either via Anglo-French diguer, from Old French digue "dike" (which is ultimately from Proto-Germanic *dīk-, from PIE root *dheigw- "to stick, fix") or directly from an unrecorded Old English verb. The older native words were deolfan (see delve), grafan (see grave (v.)).

In 19c. U.S. student slang it meant "study hard, give much time to study" (1827); the 20c. slang sense of "understand" is recorded by 1934 in African-American vernacular. Both probably are based on the notion of "excavate." A slightly varied sense of "appreciate" emerged by 1939. The strong past participle dug appeared in 16c. but is not etymological.

Related entries & more
theodicy (n.)
"vindication of divine justice," 1771, from French théodicée, title of a 1710 work by Leibniz to prove the justice of God in a world with much moral and physical evil, from Greek theos "god" (from PIE root *dhes-, forming words for religious concepts) + dike "custom, usage; justice, right; court case" (see Eurydice). Related: Theodicean.
Related entries & more
berm (n.)
"narrow ledge," 1729, from French berme (17c.), from Old Dutch baerm "edge of a dike," which is probably related to brim (q.v.). In U.S., especially "grass strip beside a road," originally the name for the bank of a canal opposite the tow path (1833; berm-bank is from 1832).
Related entries & more
Next
Advertisement