late 14c., "to fix the mind upon for careful examination, meditate upon," also "view attentively, scrutinize; not to be negligent of," from Old French considerer (13c.) "reflect on, consider, study," from Latin considerare "to look at closely, observe," probably literally "to observe the stars," from assimilated form of com "with, together" (see con-) + sidus (genitive sideris) "heavenly body, star, constellation" (see sidereal).

Perhaps a metaphor from navigation, but more likely reflecting Roman obsession with divination by astrology. Tucker doubts the connection with sidus, however, because it is "quite inapplicable to desiderare," and suggests derivation instead from the PIE root of English side meaning "stretch, extend," and a sense for the full word of "survey on all sides" or "dwell long upon."

From 1530s as "to regard in a particular light." Related: Considered; considering.

1570s, "marked by deliberation," from Latin consideratus, past participle of considerare "to look at closely, observe" (see consider). Of persons, "deliberate, prudent, given to consideration" 1580s; meaning "not unfeeling or rigorous, showing consideration for the circumstances or feelings of others" is from c. 1700. Related: Considerately; considerateness.

1570s, "consider (a matter) again, turn over in the mind again," a sense now obsolete, from French reconsidérer and probably in part a native formation from re- "back, again" + consider. Meaning "to consider (a decision) a second time with a view to changing it if doing so seems warranted" is by 1849. Related: Reconsidered; reconsidering.

late 15c., "done thoughtlessly, heedless, careless, indiscreet," from Latin inconsideratus "headstrong, unadvised," of persons, "thoughtless," literally "not properly considered," from in- "not, opposite of" (see in- (1)) + consideratus (see consider). Sense of "without regard for the feelings of others" is from 1842. Related: Inconsiderately. 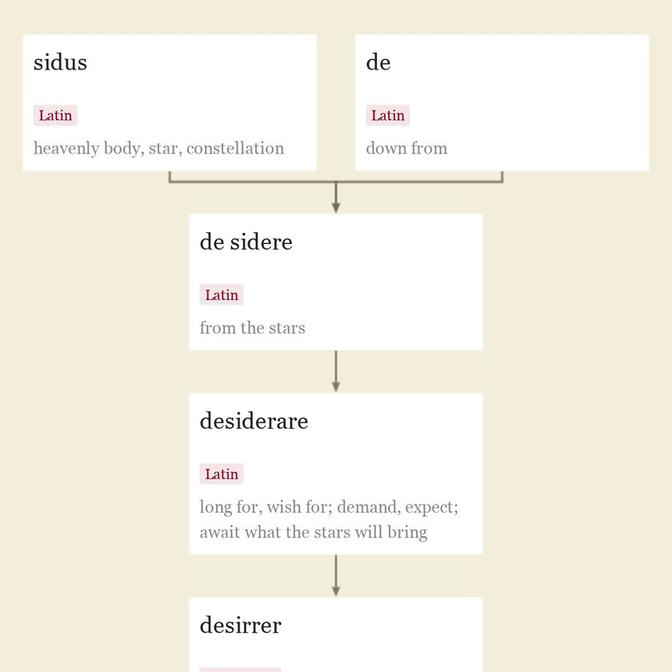 "to wish or long for, express a wish to obtain," c. 1200, desiren, from Old French desirrer (12c.) "wish, desire, long for," from Latin desiderare "long for, wish for; demand, expect," the original sense perhaps being "await what the stars will bring," from the phrase de sidere "from the stars," from sidus (genitive sideris) "heavenly body, star, constellation" (but see consider). Related: Desired; desiring.

Meaning "a taking into account, act of paying attention to" is from late 14c.; that of "examination, observation" is from early 15c.. Sense of "thoughtful or sympathetic regard" is from c. 1400. Meaning "that which is or should be considered" is from late 15c. Meaning "something given in payment" (as recompense for service) is from c. 1600.

mid-14c., deputen, "to appoint, assign as a substitute or agent," from Old French deputer (14c.), from Late Latin deputare "destine, allot," in classical Latin "to esteem, consider, consider as," literally "to cut off, prune," from de- "away" (see de-) + putare "to think, count, consider," literally "to cut, prune," from PIE root *pau- (2) "to cut, strike, stamp." Meaning "assign to a deputy" is from early 15c. Related: Deputed; deputing.

c. 1400, "subordinate officer, one given the full power of an officer without holding the office," from Anglo-French deputé, noun use of past-participle of Old French députer "appoint, assign" (14c.), from Late Latin deputare "to destine, allot," in classical Latin "to esteem, consider, consider as," literally "to cut off, prune," from de- "away" (see de-) + putare "to think, count, consider," literally "to cut, prune," from PIE root *pau- (2) "to cut, strike, stamp."

Meaning "person appointed or elected to act in the place of another or others" is from 1769.