mid-15c., "act of drawing near, arrival," from approach (v.). Meaning "way or means by which something is approached" is from 1630s. Figurative sense of "means of handling a problem, etc." is attested by 1905. Sense of "final stage of an aircraft flight before landing" is by 1930.

"make an attack," 1714, probably a back-formation from aggression; an identical word was used earlier with a sense of "approach" (1570s) and in this sense it is from French aggresser, from Late Latin aggressare, frequentative of Latin aggredi "to approach, attack." Related: Aggressed; aggressing. 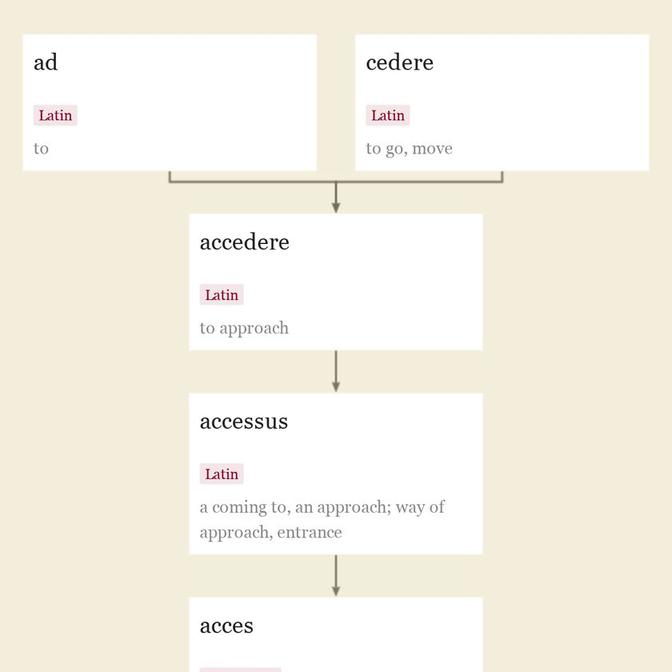 early 14c., "an attack of fever," from Old French acces "onslaught, attack; onset (of an illness)," from Latin accessus "a coming to, an approach; way of approach, entrance," noun use of past participle of accedere "to approach," from assimilated form of ad "to" (see ad-) + cedere "go, move, withdraw" (from PIE root *ked- "to go, yield"). The English sense of "an entrance" (c. 1600) is directly from Latin. The meaning "habit or power of getting into the presence of (someone or something)" is from late 14c.

"entrance," especially "horizontal mine excavation," c. 1600, from Latin aditus "an approach, an entrance; a going to or drawing near," from past participle stem of adire "to approach," from ad "to" (see ad-) + ire (past participle itus) "to go" (from PIE root *ei- "to go").

1580s, "that which is added," also "act of acceding" (by assent, to an agreement, etc.), from Latin accessionem (nominative accessio) "a going to, approach; a joining; increase, enlargement," noun of action from past-participle stem of accedere "approach, enter upon" (see accede). From 1640s as "act of coming to a position or into possession," especially in reference to a throne. Related: Accessional.

1670s, "person who first attacks," from Latin aggressor, agent noun from past-participle stem of aggredi "to approach; to attempt; to attack" (see aggression).