late 15c. (Caxton), "a recall," as from an exile (a sense now obsolete), from repeal (v.), or from Anglo-French repel, Old French rapel (Modern French rappel) "a recall appeal," back-formation from rapeler. The sense of "revocation, abrogation" is from c. 1500.

mountaineering technique for descending steep faces, 1931, from French rappel, literally "recall" (Old French rapel), from rapeler "to recall, summon" (see repeal (v.), which is a doublet). The same word had been borrowed into English earlier to mean "a drum roll to summon soldiers" (1848). For spelling, see rally (v.1).

1580s, "call back from a distance, to bring back by calling upon," from re- "back, again, to a former state" + call (v.); in some cases a loan-translation of French rappeler (see repeal (v.)) or Latin revocare "to rescind, call back" (see revoke).

A Latin-Germanic hybrid. The meaning "to revoke, take back, countermand" is by 1580s. The sense of "bring back to memory, call back to the mind or perception" is attested from 1610s. Related: Recalled; recalling.

It is the hypothetical source of/evidence for its existence is provided by: Greek pallein "to wield, brandish, swing," pelemizein "to shake, cause to tremble;" Latin pellere "to push, drive;" Old Church Slavonic plŭstĭ.
Related entries & more
Advertisement
rally (v.1)

In Old French (and Italian), re- often appeared as ra- by confusion with the true ra- (from Latin re- + ad-), and the following consonant often was doubled; compare rabbet (a doublet of rebate), rappel (a doublet of repeal). But as ra- was not recognized in English as a prefix, words with ra- in Old French usually returned to re- in English; Rally and rabbet never were because the accent had receded. In later borrowings (rappel, rapprochement, etc.) the words tend to keep their French forms.

Intransitive meaning "pull together hastily, recover order, revive, rouse" is from 1660s. Related: Rallied; rallying. Rallying-point "place at or about which persons come together for action" is by 1798. Rally round the flag (1862) is a line from popular American Civil War song "Battle Cry of Freedom." 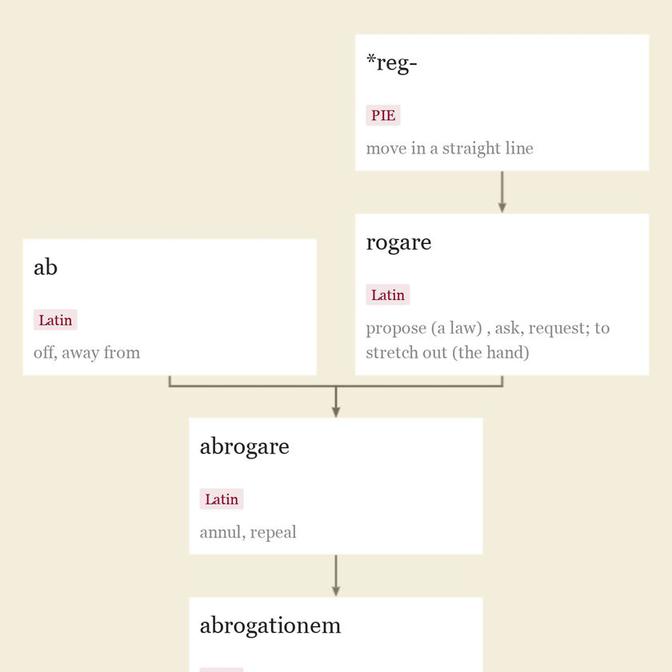 "annulling of (a law) by legislative action," 1530s, from Latin abrogationem (nominative abrogatio) "a repeal (of a law)," noun of action from past-participle stem of abrogare "annul, repeal," from ab "off, away from" (see ab-) + rogare "propose (a law), ask, request," apparently a figurative use of a PIE verb meaning literally "to stretch out (the hand)," from root *reg- "move in a straight line." 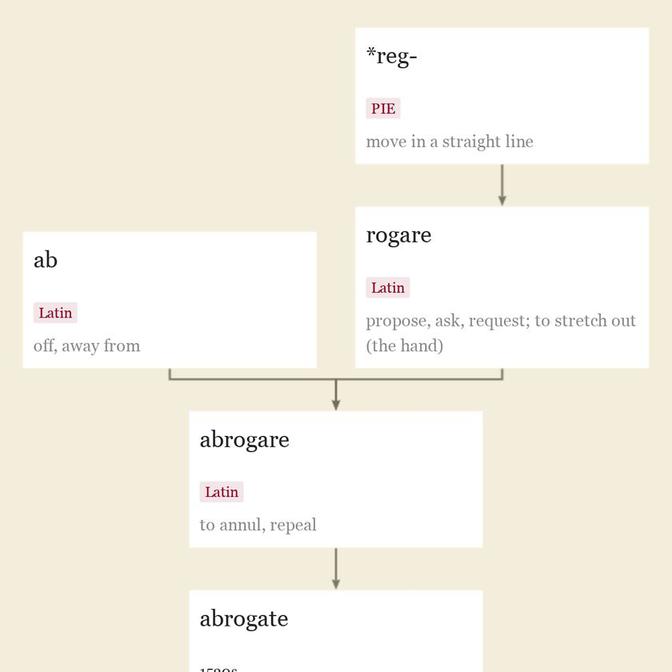 "abolish by authoritative act, repeal," 1520s, from Latin abrogatus, past participle of abrogare "to annul, repeal (a law)," from ab "off, away from" (see ab-) + rogare "propose (a law), ask, request," apparently a figurative use of a PIE verb meaning literally "to stretch out (the hand)," from root *reg- "move in a straight line." Form abrogen, from Old French abroger, is recorded from early 15c. Related: Abrogated; abrogating; abrogative.
Related entries & more
rescind (v.)

"abrogate, annul, or revoke by authority, repeal," 1630s, from French rescinder "cancel; cut off" (15c.), and directly from Latin rescindere "annul, cancel, abolish, remove by cutting off," from re- "back" (see re-) + scindere "to cut, rend, tear asunder, split; split up, part, divide, separate" (from PIE *skind-, from root *skei- "to cut, split"). Related: Rescinded; rescinding.