Old English discipul (fem. discipula), "one who follows another for the purpose of learning," especially "the personal followers of Jesus Christ during his life, the twelve Apostles chosen or called by him to be his immediate associates," a Biblical borrowing from Latin discipulus "pupil, student, follower," which is of uncertain origin.

In OED and Watkins it is said to be from discere "to learn," from a reduplicated form of the PIE root *dek- "to take, accept." But according to Barnhart and Klein, it is from a lost compound *discipere "to grasp intellectually, analyze thoroughly," from dis- "apart" (see dis-) + capere "to take, take hold of," from PIE root *kap- "to grasp." De Vaan finds the ending -pulus "difficult to explain" in the former theory and the latter "semantically not compelling."

It was not common in Old English, where the usual word was leorningcniht, and in some cases þegn (see thane). The pre-Christian Latin sense of "scholar, pupil, student" is rare in English. Meaning "one who follows or is influenced by the doctrine or example of another" is from c. 1300.

"state or condition of being a follower of another in doctrines and precepts," 1540s, from disciple + -ship. Old English had discipulhad, Middle English disciplehood. 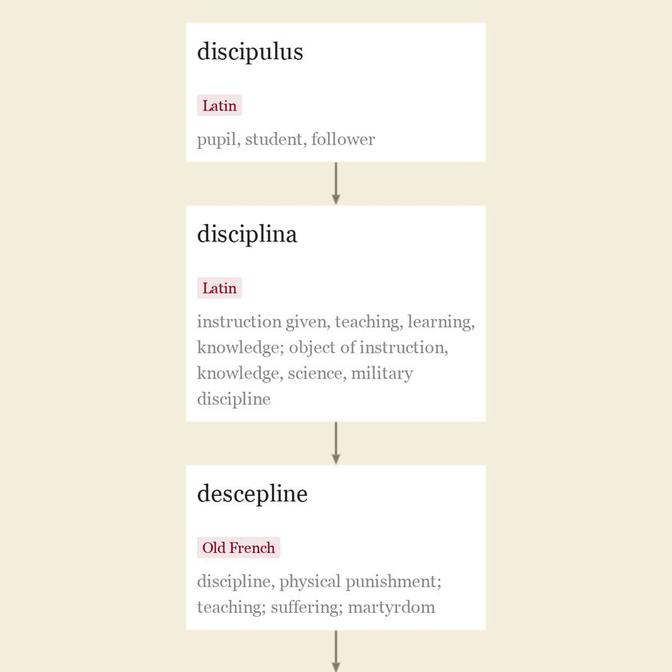 The Latin word is glossed in Old English by þeodscipe. The meaning "treatment that corrects or punishes" is from the notion of "order necessary for instruction."

Meaning "branch of instruction or education" is first recorded late 14c. Meaning "system of rules and regulations" is from mid-14c. Meaning "military training" is from late 15c., via the notion of "training to follow orders and act in accordance with rules;" that of "orderly conduct as a result of training" is from c. 1500. Sense of "system by which the practice of a church is regulated, laws which bind the subjects of a church in their conduct" is from 1570s.

1550s, "one regarded as a disciple or adherent of Satan," from Satan + -ist. Applied by their enemies to Protestant sects. The modern sense of "Satan-worshipper" is by 1896, in a French context. Related: Satanistic.

Related entries & more
Advertisement
Sikh (n.)
1781, member of a politico-religious community established c. 1500 in Punjab by Nanak Shah, from Hindi sikh "disciple," from Sanskrit siksati "studies, learns," related to saknoti "he is able, he is strong" (see Shakti).
Related entries & more
suitor (n.)
c. 1300, "a frequenter;" late 14c., "follower, disciple," from Anglo-French seutor, suitor or directly from Late Latin secutor "follower, pursuer," from sect- past participle stem of sequi "to follow" (from PIE root *sekw- (1) "to follow"). Meaning "plaintiff in a lawsuit" is from mid-15c. Meaning "one who seeks (a woman) in marriage" is from 1580s.
Related entries & more
magdalen (n.)

"reformed prostitute," 1690s, in reference to "Mary called Magdalene out of whom went seven devils," disciple of Christ (Luke viii.2), who often is identified (especially since 5c. and especially in the Western Church) with the unnamed penitent "woman in the city, which was a sinner" in Luke vii.37-50. See Magdalene.

late 14c., from Old French estudiant "student, scholar, one who is studying" (Modern French étudiant), noun use of past participle of estudiier, from Medieval Latin studiare "to study," from Latin studium (see study (v.)). An Old English word for it was leorningcild "student, disciple."

Student-teacher in reference to a teacher in training working in a classroom under the supervision of a head teacher is from 1851, American English (pupil-teacher in the same sense is by 1838).

Meaning "disciple, student youth or any person of either sex under the care of an instructor or tutor" is recorded by 1560s. Related: Pupillary; pupillarity; pupillage.