early 15c., "to contend, fight, struggle," from Latin conflictus, past participle of confligere "to strike together, be in conflict," from assimilated form of com "with, together" (see con-) + fligere "to strike" (see afflict). Meaning "be in opposition, be contrary or at variance" is from 1640s. Related: Conflicted; conflicting.

early 15c., "armed encounter, battle," from Old French conflit and directly from Latin conflictus "a striking together," in Late Latin "a fight, conflict," noun use of past participle of confligere "to strike together, be in conflict," from assimilated form of com "with, together" (see con-) + fligere "to strike" (see afflict).

Meaning "a struggle, a quarrel" is from mid-15c. Sense of "discord of action, feeling, or effect, clashing of opposed principles, etc." is from 1875. Psychological sense of "incompatible urges in one person" is from 1859 (hence conflicted, past-participle adjective); the noun was used from 15c. in the sense "internal mental or spiritual struggle" (against temptation, etc.). Phrase conflict of interest was in use by 1743. 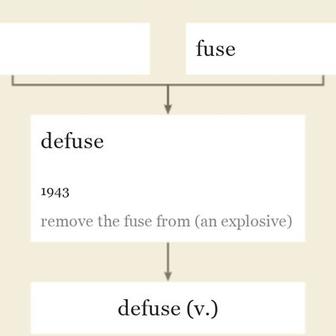 Never in the field of human conflict was so much owed by so many to so few. [Winston Churchill, 1940]

"increase the bitterness or virulence of, make (a feeling, a conflict, etc.) more hostile or malignant," 1650s, a back-formation from exacerbation or else from Latin exacerbatus, past participle of exacerbare "irritate, provoke." Related: Exacerbated; exacerbating.