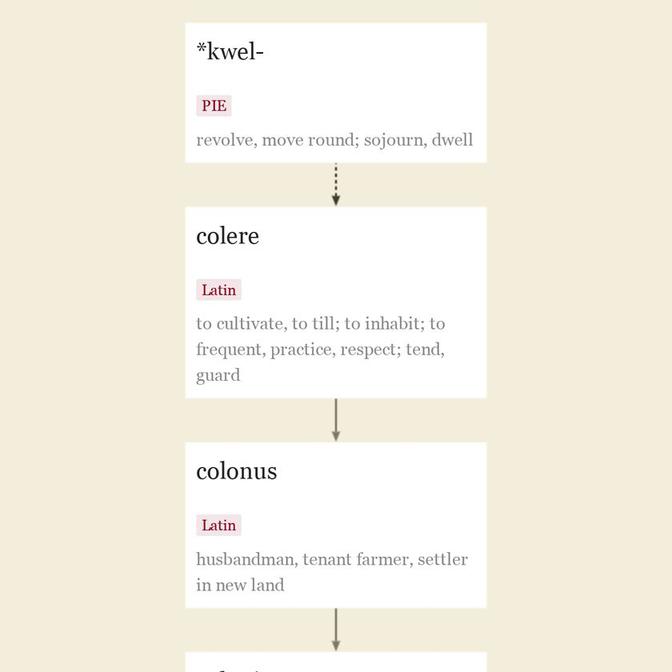 of beetles, "living under stones," 1888, from Latin lapis "a stone" (see lapideous) + colus "inhabiting," from colere "to inhabit" (see colony).

"living in the blood" (as a parasite does), by 1889, from Latin sanguis "blood" (see sanguinary) + colere "to inhabit" (see colony). Also, with classical stem, sanguinicolous.

"growing or living on the bark of trees," applied to lichens, fungi, 1851, from Latin cortic-, combining form of cortex "bark of a tree" (see corium) + colere "to inhabit" (see colony).

"pertaining to or belonging to a colony," 1756, from Latin colonia (see colony) + -al (1), or directly from colony on model of baronoinal. In U.S., especially "from or characteristic of America during colonial times" (1776). The noun meaning "inhabitant of a colony, a colonist" is recorded from 1816.

1640s, "a lodger," from Latin inquilinus "an inhabitant of a place not his own," from *incolinus, from incola "an inhabitant," from in- "in" (from PIE root *en "in") + colere "inhabit, dwell" (see colony). Zoological sense of "animal living in the abode of another, a commensal" is from 1865.

mid-15c., "place of residence of a person or family," from Old French domicile (14c.) and directly from Latin domicilium, perhaps from domus "house" (from PIE root *dem- "house, household") + colere "to dwell" (see colony). In law, specifically, "that residence from which there is no intention to remove, or a general intention to return" (mid-18c.).

As a verb, "to establish in a fixed residence," it is attested by 1762 (implied in domiciled). Related: Domiciliary.

of birds, "bearing young which are helpless at birth," 1896, from Modern Latin Nidicolae (1894), the zoologists' collective name for the species of birds having the young born in a more or less helpless condition, unable to leave the nest for some time and fed directly by the parent, from Latin nidus "nest" (see nest (n.)) + colere "to inhabit" (see colony). Contrasted to nidifugous birds (1902), whose young are well-developed and leave the nest at birth (from Latin fugere "to flee").