When did the English discover the Anglo-Saxons? 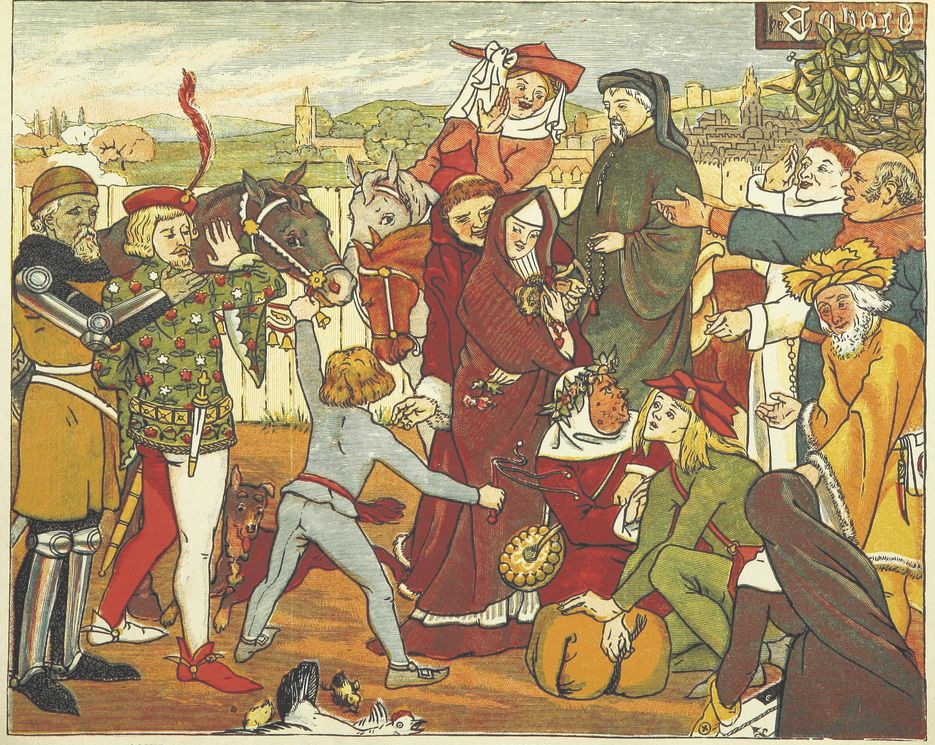 Old English didn't stop all at once in 1066. Chaucer was as far from William the Conqueror as we are from Dryden and Andrew Marvell, and we can still read Dryden and Marvell. But knowing Chaucer doesn't help you much with Old English. Chaucer's London English of the late 14th century probably was more Frenchified than what was out in the countryside. The literary Englishmen of the 14th and 15th century seem to have absorbed the Red Queen's advice to Alice: "Speak in French when you can't think of the English for a thing."

Chaucer used the term "old English," and he mocked the hrim-hram-hruff, but he also could do the alliterations like a pro, and I suspect he knew Anglo-Saxon better than his works reveal. Caxton, a century after Chaucer, wrote that he found Anglo-Saxon English unintelligible. In the introduction to "Eneydos" he wrote that some people criticized him, "saying that in my translations I had over-curious terms which could not be understood of common people, and desired me to use old and homely terms in my translations."

Fain would I satisfy every man, and so to do took an old book and read therein, and certainly the English was so rude and broad that I could not well understand it. And also my Lord Abbot of Westminster did do show me late certain evidences [i.e. deeds, charters, etc.] written in old English for to reduce it into our English now used. And certainly it was written in such wise that it was more like to Dutch than to English, I could not reduce it nor bring it to be understood.

That was in 1490 or so. By the 17th century, even readers of Chaucer needed a glossary or a translation to understand his Middle English. And the remnants of pure Old English speech that lingered in the language were so few and scattered that the language would be gibberish to the average English-speaker of 1600. There was no "discipline," no academic study of Old English to help anyone understand it.

Interest in old books was an antiquarian hobby of a very few who had money to spend on it. When Henry VIII dissolved the monasteries, it drew attention to their libraries, which were full of charter books and collections of homilies on which poems and other things had been written centuries ago.

In some cases, antiquarians worked to salvage them from the general dispersal. (There are stories of old monastery books used as toilet paper.) One such man was Sir Robert Bruce Cotton (1571–1631), an antiquarian and bibliophile who collected many manuscripts from the dissolution of the monasteries; his collection later was the basis of the British Library. Cotton was a collector of all sorts of things, such as old coins and Roman busts. He enjoyed getting something from someone who didn't know what it was worth. He would love eBay.

In the 1600s this hobby merged with practical and polemical goals to make Anglo-Saxon writing a topic of interest. To secure the deeds and titles for land (especially that confiscated from the monasteries), reference had to be made to old donations, often dating to Anglo-Saxon times. You had to read Old English to know whether you owned your land or not.

Also, and a bit ironically, considering Henry VIII's role, Anglicans in the wake of the Reformation wanted to prove the historical independence of the English church from Rome. A piece of anti-Catholic propaganda from 1566 contains the first printed Anglo-Saxon.

Religious disputes, then arguments — even a civil war — over the nature of the state, the role of the king and the parliament, absorbed 17th century England and sent it back again and again to historical evidence. To read it and use it, they had to understand it thoroughly.

In this atmosphere of combined efforts of the hobbyists and the polemicists, first editions of two foundational documents, the Anglo-Saxon Chronicle and the Anglo-Saxon version of Bede's history of the English church, appeared in print in 1643. By 1659 they were joined by a rudimentary Old English grammar and a brief dictionary.

By the later 1600s there was a flowering of Anglo-Saxon philology, though it was limited to a small group of scholars. Milton learned Old English in the 1650s; in "Paradise Lost," written in the 1660s, the famous opening speech by Satan has reminded many later readers of the Anglo-Saxon poem we call "The Fall of Angels." Though there is no proof Milton lifted it, we know he was in the same place the book was, and he could read it.

They expanded the search to include other Germanic relatives, such as Icelandic and older forms of German, to shed light on Old English. But they were also connecting these languages to one another and beginning to think scientifically about the differences. This was the mental process that would blossom a century later in the discovery of Indo-European and modern scientific etymology.

But in the 1600s, the society they lived in offered no way to translate this work into food on the table, clothes on one's back, and a roof over one's head. Oxford was training men for the clergy. If students there did scientific research into language it was in spite of, or instead of, their real studies.

For example, Humfrey Wanley, who amazed his Oxford master with his ability to study 17 hours a day, plunged into Old English for sheer love of old manuscripts and the learning preserved in them. Wanley lived on the edge of poverty all his life. At one point he wrote to a friend of a plan to marry a well-off cousin, whom he described as "not very ugly," but for some reason his suit was not well-received. He later married his widowed landlady, which at least saved him money on rent.

The friend he wrote to was George Hickes, learned clergyman, who marshaled Wanley and all the other available Anglo-Saxonist talent. After years of labor he published a huge two-tome summation of the scholarship, printed on the press at Oxford 1703-05. It stressed the kinship of the Germanic languages.

Four years later, Elizabeth Elstob, protegee of Hickes, crony of Wanley, made an important contribution to the cause with a translation of Aelfric's 10th century life of Pope Gregory the Great. She wrote it not in Latin, the language of international intellectuals, but in English. She did her best to popularize Old English (she called it English-Saxon), believing it necessary to grasp modern English, and in 1715 she published an improved grammar of the tongue, again in English, not Latin. When Thomas Jefferson wanted to teach himself Anglo-Saxon, he used Elstob's book.

The amateur students of Old English in the 17th century had learned to relate languages by comparing them. They had taken from classical studies the methods of disassembling a dead language and piecing together its meanings from context. They were on the way to modern linguistics.

Elstob worked with her elder brother, also a Saxonist. But they ran up debts to finance their scholarship, and when he died she had to flee London to avoid debtor's prison and lived under an assumed name in Worcestershire.

The flower was fading. By 1720 intellectual interest in England had turned to Druidry, Celtic heritage, Stonehenge, and the imaginary world of Phoenician Druids bringing the Abrahamic religion to Britain, complete with chariot races around Stonehenge. Anglo-Saxonism sank back to being an antiquarian's quirk for another century, until it re-emerged in a different intellectual climate.

Missing from all this is one work we now think of as the central piece of the Anglo-Saxon legacy: "Beowulf." In the second volume of Hickes' summation of Anglo-Saxon was a register of all the Anglo-Saxon manuscripts then known to exist. "Beowulf" turns up in the list, in the library of Sir Robert Cotton, naturally. It must have come from a monastery somewhere, but no one now can say which. Nobody bothered about it. They were looking for church writings and deeds, not poetry. It barely survived a fire in 1731.

Only in the 1780s did a Danish scholar, Grimur Thorkelin, bother to read through "Beowulf." Thinking it a Danish story, he had it transcribed for publication. In 1807, the English bombarded Copenhagen. Thorkelin's house burned and his manuscript, which just had been completed, was destroyed. Thorkelin started over again, publishing the first printed edition of "Beowulf" in 1815 (in Latin). It did little more than call attention to its existence; an English edition didn't appear until 1826 and it took a while for it to be recognized as a classic. Longfellow, the American poet, was among the first to beat the gong for it. Later William Morris, and then Tolkien boosted it into its proper place.