A walk through an etymological urban legend 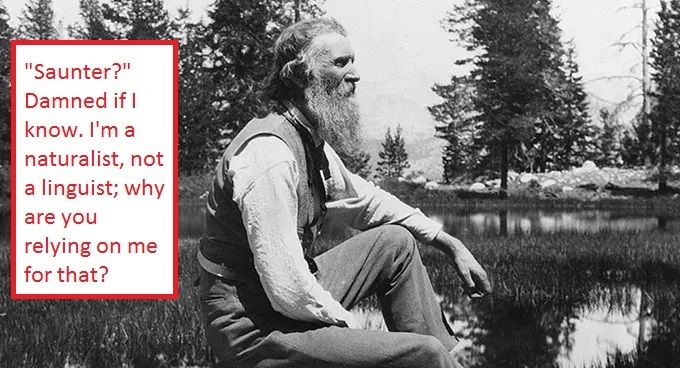 Etymological urban legends — specious stories of how words came to be — are as old as Plato. A catalogue of them would fill a library shelf. Exploding them all would be a fool's errand, and I'm not that kind of fool. But some stick in the craw more than others, and probably none more than this*:

Hiking — "I don't like either the word or the thing. People ought to saunter in the mountains — not hike! Do you know the origin of that word 'saunter?' It's a beautiful word. Away back in the Middle Ages people used to go on pilgrimages to the Holy Land, and when people in the villages through which they passed asked where they were going, they would reply, 'A la sainte terre,' 'To the Holy Land.' And so they became known as sainte-terre-ers or saunterers. Now these mountains are our Holy Land, and we ought to saunter through them reverently, not 'hike' through them." - John Muir

This quote is not in Muir's writing. It appears in an account of a conversation with Muir published by Albert Palmer in "The Mountain Trail and its Message," 1911 (p.27):

One day as I was resting in the shade Mr. Muir overtook me on the trail and began to chat in that friendly way in which he delights to talk with everyone he meets. I said to him: "Mr. Muir, someone told me you did not approve of the word 'hike,' " is that so?" His blue eyes flashed, and with his Scotch accent he replied:

And then you get the quote.

I'm willing to allow the gist of the quip to be true, and that Muir really did say something like that on some occasion. Perhaps Palmer had the sort of memory attributed to Coleridge that could recall a casual conversation completely.

But that doesn't mean the etymology is correct.

The etymology of saunter is obscure today, as it was two centuries ago, and the word was much debated among linguists in the late 19th century. And, in the absence of evidence, one of the many theories brewed in the fog was that it came from à  la sainte terre.

This is the etymology given by Samuel Johnson in his great dictionary (1755):

Which, as you can see, is a different sense than it carries in the Muir quip; in fact, the story of saunter in Johnson is a pejorative one, in Muir a positive one.

[Hester Thrale, the author and diarist, who knew Johnson well, wrote of saunterers and loiterers and lingerers that Johnson "had indeed an aversion to such people amounting almost to antipathy, though he considered himself among the number, and passed his life forming and breaking resolutions of active diligence."]

Before Johnson, Bailey's dictionary (1724) has an abbreviated version of the same etymology. It appears in English dictionaries from the 1680s and '90s, including the 1699 canting crew dictionary and Miege's English dictionary of French. Chances are the story comes from French, but I haven't tracked it back across the Channel.

Henry David Thoreau gave his own, elaborated version of the etymology fable in “Walking” in 1862. He had a religious appreciation of the woods, and this perhaps gave a turn and a moral to his version of the tale. It is worth quoting at length for the magic of Thoreau's prose:

I have met with but one or two persons in the course of my life who understood the art of Walking, that is, of taking walks,—who had a genius, so to speak, for sauntering; which word is beautifully derived "from idle people who roved about the country, in the Middle Ages, and asked charity, under pretense of going à la Sainte Terre," to the Holy Land, till the children exclaimed, "There goes a Sainte-Terrer," a Saunterer, a Holy-Lander. They who never go to the Holy Land in their walks, as they pretend, are indeed mere idlers and vagabonds; but they who do go there are saunterers in the good sense, such as I mean. Some, however, would derive the word from sans terre, without land or a home, which, therefore, in the good sense, will mean, having no particular home, but equally at home everywhere. For this is the secret of successful sauntering. He who sits still in a house all the time may be the greatest vagrant of all; but the saunterer, in the good sense, is no more vagrant than the meandering river, which is all the while sedulously seeking the shortest course to the sea. But I prefer the first, which, indeed, is the most probable derivation. For every walk is a sort of crusade, preached by some Peter the Hermit in us, to go forth and reconquer this Holy Land from the hands of the Infidels.

"But I prefer the first, which, indeed, is the most probable derivation." Thoreau is the most dangerous of American writers because the most subtle, and I can't believe he isn't aware of the flaw there: The version that best fits his bias is the one that must be most likely to be true. It's a wink, and it's a lesson modern internet users ought to have tattooed on their brains. Three times in an average paragraph, Thoreau makes you wiser than you were.

The etymological grain of sand at the heart of this pearl seems to be from Johnson, ultimately if not directly, as it includes his two accounts of a possible origin of saunter. The quoted material follows Johnson, though not exactly.

I can believe that Johnson read Bailey, and Thoreau read Johnson, and Muir read Thoreau, and Palmer heard something like that from Muir.

That 18th century etymology proposed by Johnson hasn't been taken seriously for more than 100 years, as far as I can detect. There is no evidence of anything like that in Middle English writings. The retort that "but if no one knows where it comes from, this story could be true" is not the sort of reasoning an intelligent person would offer for spreading a tale.

Muir was no smarter than his times, which is no fault in anyone. Neither was Thoreau, neither was Johnson. Muir and Thoreau weren't advancing a theory about etymology. They were illustrating an attitude about the wilderness from a factoid they had in their heads. The attitude itself is the thing that we should remember and bequeath to the future. But the truth has to be (dis-)entangled from the falsehood which frames it, and which it accidentally legitimizes.

* Why? Because it is the one I see shared most often by people who read and think, who have a healthy skepticism of most things, especially those stories that fit too tightly with their biases. That they keep spreading this one is evidence that either the ancient human need to tell just-so stories is stronger than learning and reasoning, or that the internet has corroded even the better minds that use it.