The Germans call them "Janus-words," after the ancient Roman god who guarded portals, doors, and gates; patron of beginnings and endings. He had two faces, facing opposite ways.* 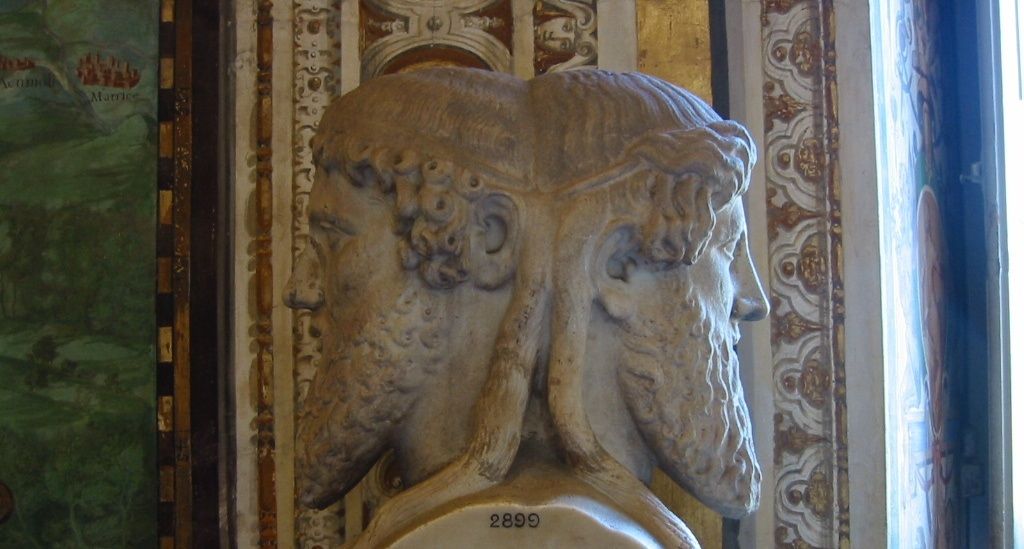 A Janus-word is a word with two meanings that seem to contradict each other: Cleave, means both "to stick together" and "to break apart;" the verb dust means both "to put dust on" and "to take dust off."

Of the commonly cited examples, some are coincidence: words unrelated to one another etymologically but which have evolved into identical forms.

The two cleaves, for example, are from entirely different roots. In Old English one was a strong verb (which gave us the cloven hoof of the ruminants and the devils), which helped tell them apart.

The "leaping" bound and the "tied-up" bound also are different words, as are the two verbs clip. The formally identical Latin in- elements, one meaning "not" and the other "in," account for seeming contradictions in impregnable and inflammable.

Some words on such lists don't really belong there: Appropriate (v.) is "to take" from and also legislatively "to give (money)" for, but the giving is only in the process of taking it from the budget. It's always a taking.

In other cases it's simply a matter of transitive and intransitive uses: "He left" is the opposite of "he was left," but the sense connection is clear.

Some such words depend on the very broad range of senses given to some English prepositions. Over gives overlook and oversight, both of which have opposite senses: You might cast your gaze over something and it escapes notice as beneath your sight. Or you may stand over something the better to observe it minutely, or perhaps that sense is via the notion of looking it "all over," that is, "completely."

Verbs from nouns can have opposite senses depending on how you regard the noun. To dust in Middle English was "to rise in the air as dust;" which is extinct. In the 16c. it came to be used as "to sprinkle with dust" and "to rid of dust." None of them was "from" the other; they all three came up separately from the noun.

To weather "come through safely" is from the notion is of a sailing ship riding out a storm. The sense of "wear away by exposure" is about a century later, from the effect of weather on things left outdoors. Again, neither is "from" the other.

To table in legislative procedure tends to have different and opposite meanings on either side of the Atlantic. In parliamentary sense it is "to lay on the (speaker's) table for discussion;" but in U.S. political bodies there isn't such a table, and the notion is to set it down, "lay (it) aside for future consideration," with more than a grain of euphemism.

Execute often is cited as an example, but the meanings "carry out" and "kill after legal sentence" don't seem quite contradictory, and the second sense evolves naturally from the first. To "execute" a condemned man is to carry out ("execute") the capital sentence imposed on him. There's an anecdote I've included in the site, attributed to John McKay, that notoriously sarcastic coach of the then-woeful Tampa Bay Buccaneers U.S. football team, who, when asked by a reporter what he thought of his team's execution, replied, "I think it would be a good idea."

Originally in Middle English it meant to "perform" any sort of judgment or sentence, the specific meaning "to inflict capital punishment" is from Middle English legal phrases such as don execution of deth — "carry out a sentence of death." Executor and executioner formerly were used indifferently, because both are carrying out legal orders.

But there are some cases where the opposite meaning has evolved directly from the original one.

Take the two hews. The first is "to chop, hack, gash, strike with a cutting weapon or tool" The seemingly contradictory sense of "hold fast, stick to" (in phrase hew to) is late (1891) and said to be generally American. It developed from an earlier figurative phrase hew to the line "stick to a course," literally "cut evenly with an axe or saw."

Ravel has seemingly contradictory senses (ravel and unravel are both synonyms and antonyms), but they are reconciled by its origins in weaving and sewing: as threads become unwoven, they get tangled.

That word has a very fluid history. The meaning "refuse to work to force an employer to meet demands" is from 1768, perhaps from notion of striking or "downing" one's tools, or from sailors' practice of striking (lowering) a ship's sails as a symbol of refusal to go to sea, which preserves the verb's original sense of "make level, smooth."

The baseball "swing-and-a-miss" sense evolved curiously. Originally in the sport (1840s) the word meant "any contact with the ball." The modern sense developed by the 1890s, apparently from foul strike, a hit out of play which counted against the batter, and as hit came to be used for "contact with the ball," strike, shortened from foul strike, was left for "a swing and a miss" that counts against the batter.

*Janus also figures in the English word janitor, from Latin ianua "door, entrance, gate." Janitors originally were door-keepers; the meaning "caretaker of a building, man employed to see that rooms are kept clean and in order" is from the early 18th century. It also figures in January, from Latin Ianuarius (mensis) "(the month) of Janus," to whom the month was sacred as the beginning of the year according to later Roman reckoning.