"We have met the enemy and he is us" - Pogo Possum 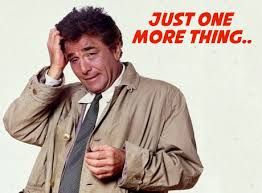 The latest appalling idiocy of the internet is that the name of the children's game tag  is an acronym. That drew a flood of traffic to the word's entry (from 24 hits on July 11 to 8,998 hits on July 17) — thank you on behalf of intellectual honesty to everyone who took the trouble to look it up. Yesterday I took the unusual step of editing the etymonline entry to make an explicit push-back against that claim.

The Twitter bilge goes: "How old were you when you learned that the game TAG stands for 'Touch and Go'"

One of the dopes who passed it on added, "I wonder how many dictionary "origin: obs." words are ancient long-forgotten acronyms." A follower of his with better sense cast some doubt on the whole thing and linked to the (pre-editing) etymonline entry for "tag."

To which the believer in ancient acronyms responded "Lots of 'possiblys' and "probablys' in there ..."

Yes, because awareness of and statement of the limits of the certainty of one's evidence is a sign of weakness, whereas bald-assed assertion with no effort whatsoever to make or show evidence smells like victory.

So what can you do to help halt the intellectual vandalism of backronyms?

When you confront an acronym theory for the etymology of a common English word, interrogate it.

1. Look at the earliest form of the word (use etymonline or something like it). The meme that says SHIT  is an acronym founders on the Old English form of the word, which began with an SC-. That doesn't fit the story. The evolution of its spelling to SH- in Middle English is a regular process that is attested in hundreds of words.

2. Look for relatives and cognates. The meme that says SIR  is an acronym can't explain French SIRE. Nor can the SHIT acronym story account for German SCHEISSEN.

3. Look at context. The meme that says GOLF  is an acronym for "Gentlemen only, ladies forbidden" is based on a 20th century social sensibility that would have been irrelevant to word-formation in 15th century Scotland, where GOLF originates (as "gouf" — see 1. above). The fake etymology of POSH  that involves bookings on ocean liners doesn't work because the earliest uses of the adjective in the current sense have nothing to do with ocean liners, and the documents relating to ticket sales for sea voyages from that time show no use of the term that supposedly spawned the acronym.

4. Look at dates. Abbreviations that become words are new things. Most of them (80% or more by my rough count, but don't quote that) are post-1941. Most of the rest are post-1914. Those two dates are clues: Modern wars, with their vast bureaucracies, new technologies, and mounds of paperwork, breed acronyms. The word ACRONYM  itself was coined only in 1943. Any acronym theory for a word in use before 1914 ought to be treated with special suspicion.

5. Occam's razor applies. The generators of fake etymologies often pick a word marked "of uncertain origin" in the dictionaries. But their acronym theory still has to pass the four questions above.

For more on acronyms, see here.

This discussion considers English. A number of words that passed into English from the old Soviet Union — the news agency TASS  and GULAG  concentration camp system — are Russian acronyms. All are post-World War I, of course.

A handful of words of acronymic origin predate 1914, and they are worth a look.

SWAK , the acronym for "sealed with a kiss" (written on the back of an envelope — ask your grandmother what that is — of a love letter, etc.) is from a few years before World War I, though it was popularized in soldiers' letters home from that war. It probably is meant also to echo the sound of a kiss.

POTUS and  SCOTUS, wire service acronyms for "president of the United States" and "Supreme Court of the United States," are survivals from the Phillips Code, created in 1879 to speed up Morse code transmissions. But these aren't much used except as journalistic jargon.

HEP, the cry used to instigate attacks on Jews in Europe, dates from 1819, in reference to Jewish expulsions by mobs in various German cities in that year (later called the hep-hep riots). A popular theory at the time held it to be an acronym of Latin Hierosolyma Est Perdita ("Jerusalem is lost"), which, as H.E.P., supposedly was emblazoned on the banners of medieval recruiters for the Crusades who drew mobs that subsequently turned on local Jewish populations. That such massacres happened is true enough, but in the absence of evidence the story about the supposed acronym looks like folk etymology, and there are more plausible explanations for the word. Still, the suggestion of an acronym origin as far back as 1819 is remarkable.