They lay soe close together,

they made me much to wonder;

I knew not which was wether,

vntill I saw her vnder.

then off he came & blusht for shame

soe soone that he had endit;

yet still shee lyes, & to him cryes,

The substitution of Middle English -o- for Old English -u- was a scribal habit before minims to avoid misreading the letters in the old style handwriting, which jammed them together (see U). Modern past tense form came is Middle English, probably from Old Norse kvam, replacing Old English cuom.

Remarkably productive with prepositions (NTC's "Dictionary of Phrasal Verbs" lists 198 combinations); consider the varied senses in come to "regain consciousness," come over "possess" (as an emotion), come at "attack," come on (interj.) "be serious," and come off "occur, have some level of success" (1864). Among other common expressions are:

To have it coming "deserve what one suffers" is from 1904. To come right down to it "get to fundamental facts" is from 1875. 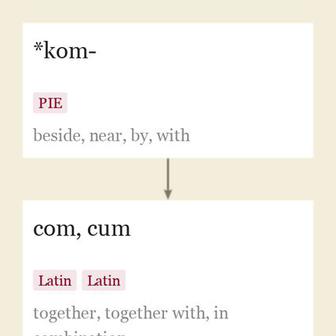